Swooping valleys and soaring peaks, enchanting woodlands and quiet rivers are all waiting to be explored by bicycle. Warmer weather means it's time to venture to the great outdoors, whether it's the picturesque Cornish coast or a short jaunt from London. Here are ten of the UK's most beautiful cycling routes. 1. The Lakeland Loop, Lake District Difficulty rating: Difficult...

Swooping valleys and soaring peaks, enchanting woodlands and quiet rivers are all waiting to be explored by bicycle. Warmer weather means it’s time to venture to the great outdoors, whether it’s the picturesque Cornish coast or a short jaunt from London. Here are ten of the UK’s most beautiful cycling routes. 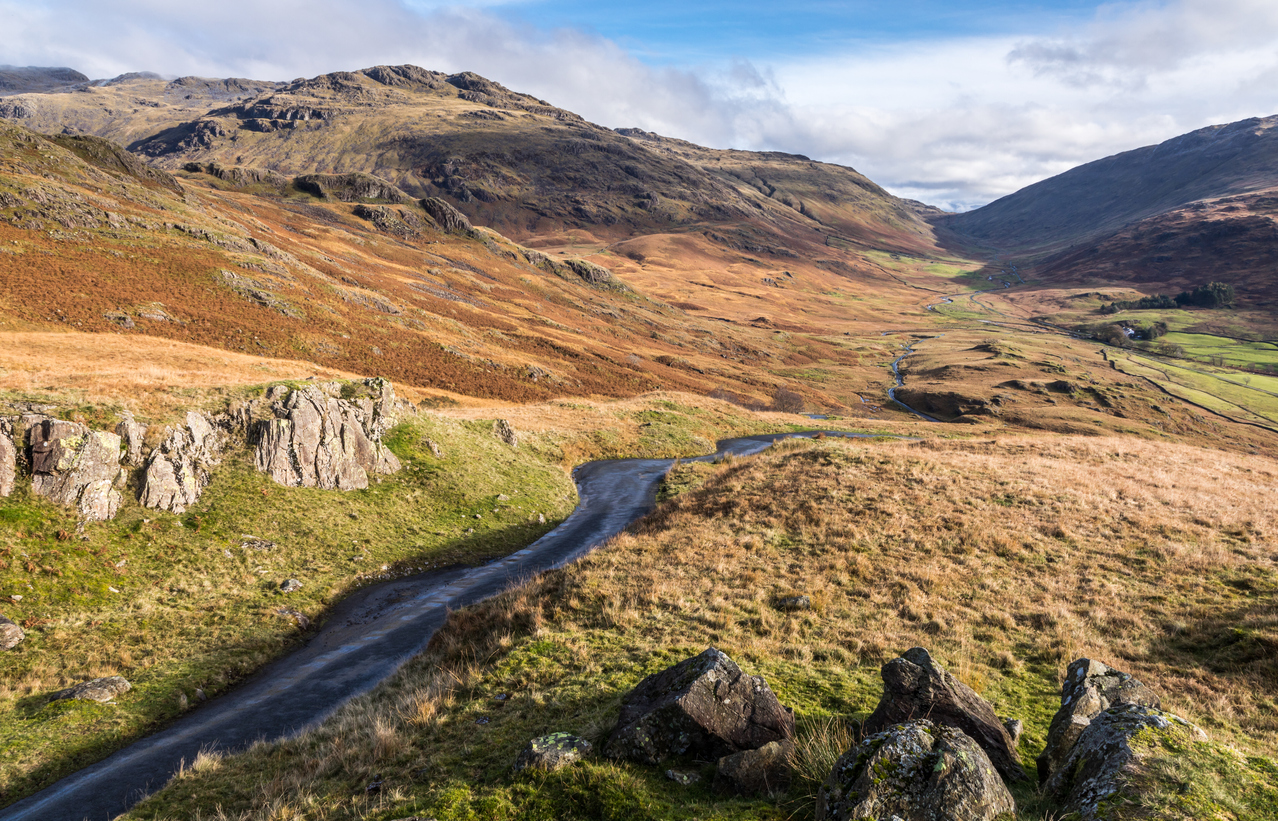 The 65km loop brings cyclists to some of the most picturesque and less-trodden areas of West Cumbria in the Lake District, including Whinlatter Pass, Hardknott Pass and the famous Wrynose Pass, known amongst cycling enthusiasts as one of the most majestic and hard-to-tackle passes. The route starts in Broughton-in-Furness by the peaceful Lake Coniston and quickly picks up pace with a sharp climb into vast, rugged terrain before dipping back down. Reward yourself with a baguette or homemade soup of the day at the Square Café. 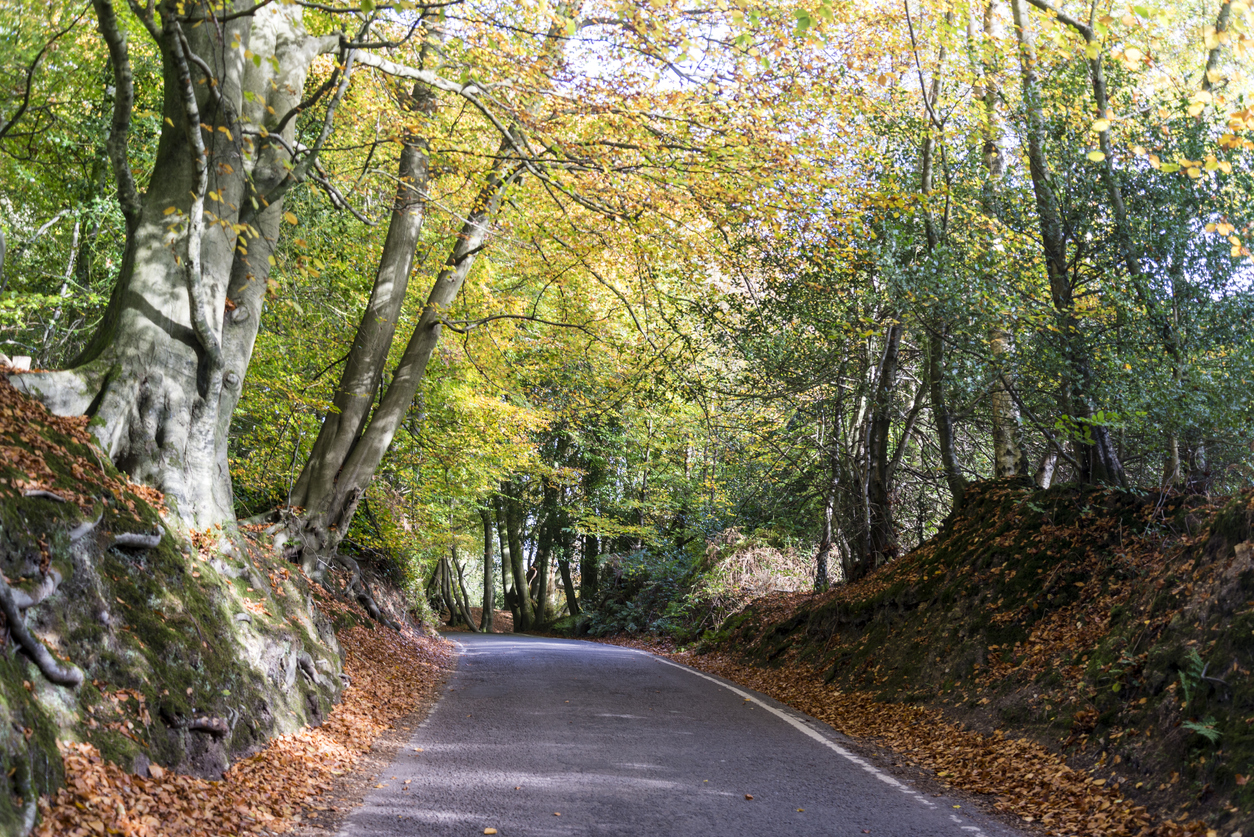 A popular hill amongst cyclists since the late 19th century, the circuit itself was only set up to accommodate the Olympics in 2012. But there’s no need to be an Olympian to complete this short 16.8km route – reasonably fit people can conquer “Zig Zag Hill”. It’s vast swathes of green pastures throughout the twisting ascent to a panoramic view of the River Mole. Have a cake or coffee at Destination Bike before setting out or make a reservation at fine dining restaurant Sorrel to celebrate the achievement with a multi-course meal consisting of monkfish and duck. 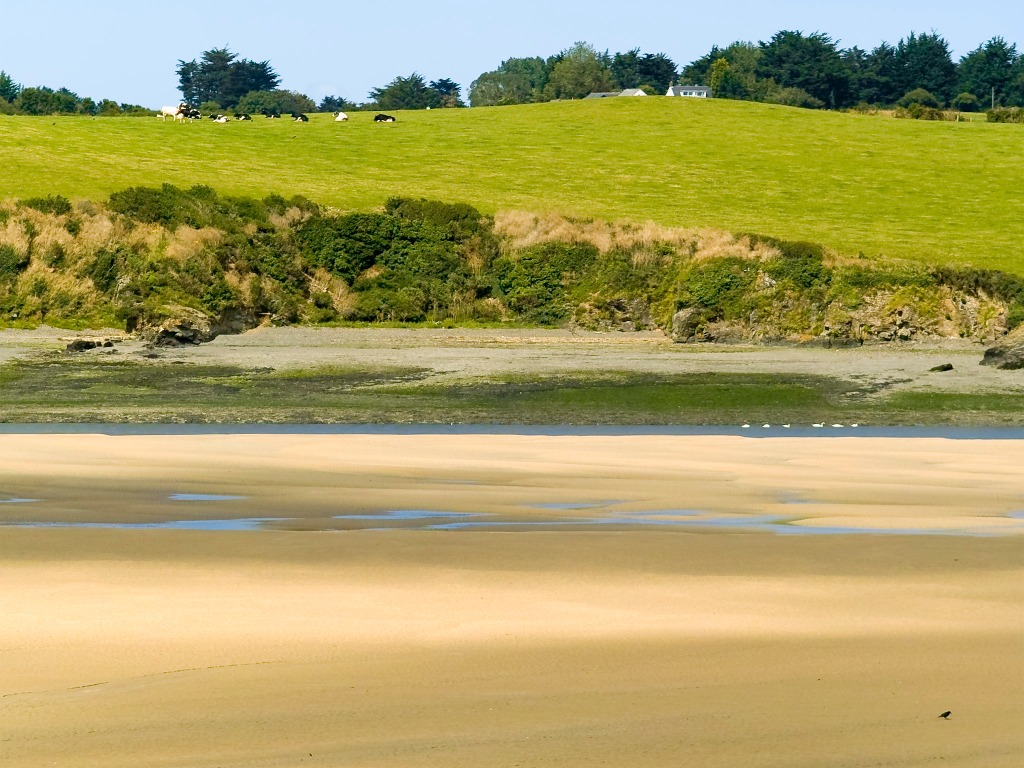 This 19km mostly flat trail follows an abandoned railway line from the Cornish coast by Padstow inland through the Camel Estuary and the woodlands of Camel Valley to the charming historic town of Bodmin. Start the journey with a wonderful sampling of Cornish seafood such as fish cakes, fish chili burger and sea bass at Rick Stein’s Seafood Bar and Fishmongers and end it with a pint at one of the many pubs in Bodmin. 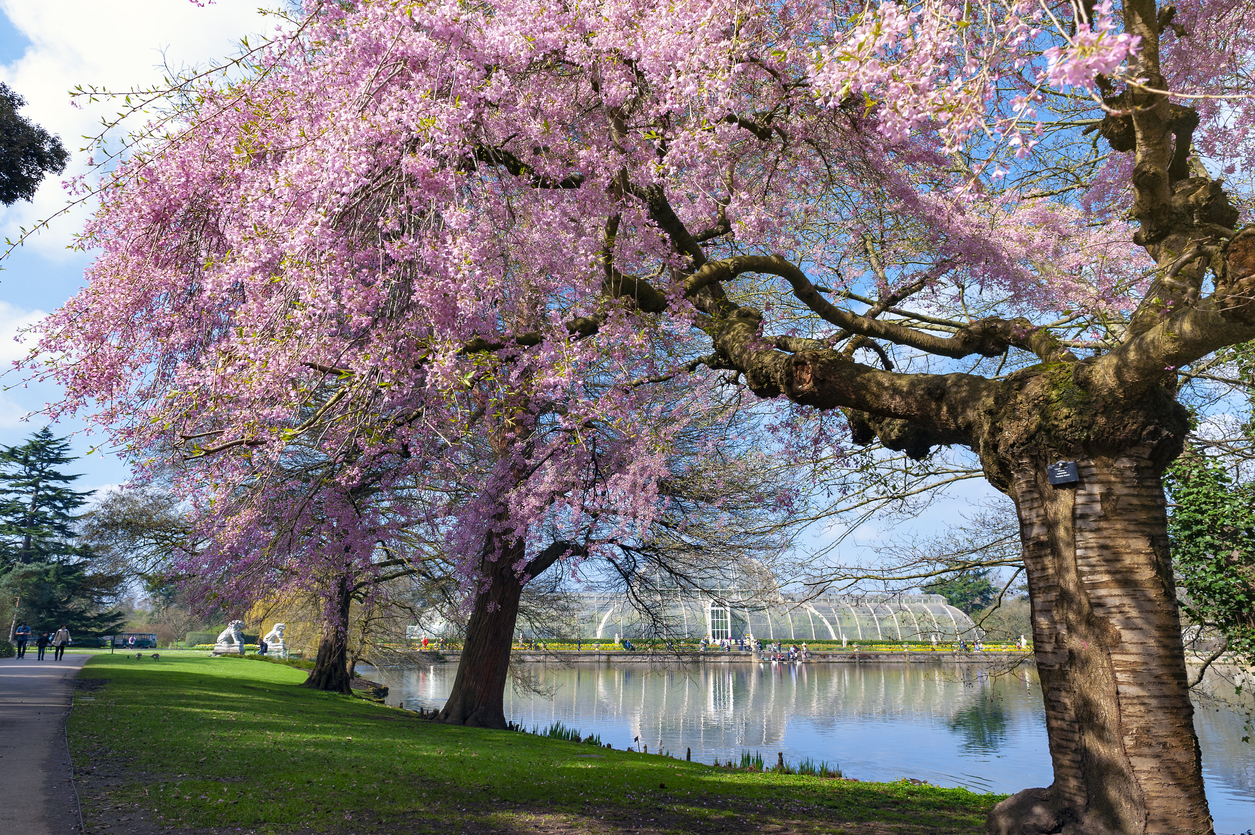 The London to Surrey route shows a leafier side to London and varies in distance from about 22.5km through the Royal Botanic Gardens, Kew, to the slightly longer 26km route tracing the River Thames. Watch the urban landscape give way to an evergreen Richmond Park and Bushy Park. But first, a brunch of sweet potato and lentil burger or smashed avocado on sourdough at Boma Bridge is in order.

Start the ride with a feast of Wild Sussex game sausage, spicy peppered beef brisket or a traditional Sunday Roast at modern British restaurant Callenders. Full of old trees creating natural arches and cuckoos, woodpeckers and butterflies, the Cuckoo Trail is as whimsical as it sounds. About 22.5km of mostly flat footpath and cycle path following a disused railway line from Hampden Park to Heathfield in the East Sussex countryside, the route is suitable even for children.

For a short 15km ride, this cycle trail in southern Snowdonia packs a lot, including salt marshes and stunning mountain and coastal views. The trail starts in the quaint hilly market town of Dolgellau, following another old railway track by the Mawddach estuary and crossing the iconic railway bridge to Barmouth by the coast. Have some wild salmon and pudding in the outdoor dining area overlooking green pastures at Mawddach Restaurant near the beginning of the route.

Hartington has almost 50km of countryside bike trails to choose from, ranging from easy to moderate levels. Have a snack of sandwiches and scones at the Beresford Tea Rooms or buy some cheese for a picnic at The Old Cheese Shop before setting out. The Tissington Trail follows a former railway track parallel to the A515 and boasts views of White Peak with sheep grazing in pastures. Another choice is the High Peak Trail which has a steeper incline at the end towards High Peak Junction, the site of a former railway by a river. 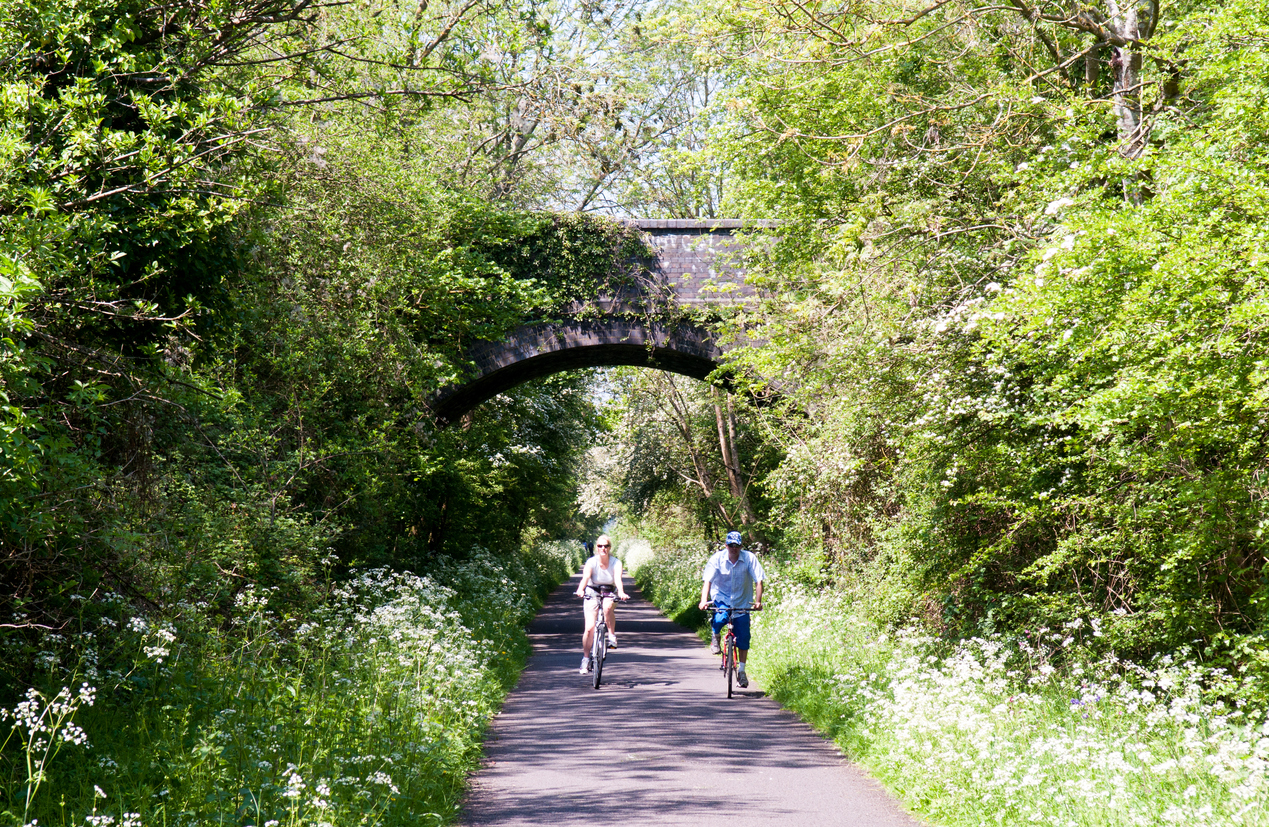 The flat 24km railway path used by cyclers and runners connects two iconic English cities, the hip, artsy Bristol and grand, historic Bath. Pop into Poco Tapas Bar, a sustainable restaurant that uses local organic ingredients for a meal of gin and fennel cured mackerel or a Braised Forest of Dean Wild Boar. The path remains lush and tree-lined for most of the way despite being next to a 19th century railway line.

Have a meal in the glasshouse atrium decked with indoor plants and colourful-patterned tiles at The Pig in Brockenhurst. The menu, which could include chargrilled purple sprouting broccoli, is influenced by the micro seasons and depends on what the in-house forager finds nearby. There are several bike routes to embark on from here. It’s just a 10.5km ride to Lyndhurst, a quiet and easy route suitable for families with children – look out for ponies! The nearly 18km ride from Brockenhurst to Rhinefield is a little harder with gentle inclines and an equally impressive view of the forest.

Spectacular this 70km loop beginning and ending in Applecross and swooping through the Scottish Highlands is. The famed route along which the single-track Bealach na Bà – which means Pass of the Cattle in Gaelic – lies, is often likened to the dramatic, winding roads of the Alps that seem to stretch out indefinitely. A combination of coastal roads and dramatic highland terrain, cyclists will have to work for this bird’s-eye view of the Isle of Skye – the circuit has one of the biggest elevation gains at 1,538m. Have a dinner of crab salad and fish pie with a glass of champagne at the Applecross Inn to celebrate. 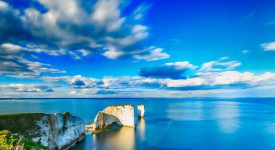 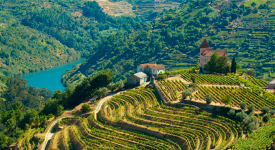