How to Get To and From Heathrow Airport

How to Get from Heathrow Airport to London You’ve landed, you have your suitcase, and you’re ready to take on the world. But how exactly do you get from the tarmac to the big city just across the way? We’ve created a nifty guide to help you out. [embed]https://www.ebookers.com/travel-blog/Airport-videos/ebookers-heathrow-to-london.mp4[/embed]   Option 1: Piccadilly Train If you’re after the cheapest option...

How to Get from Heathrow Airport to London

You’ve landed, you have your suitcase, and you’re ready to take on the world. But how exactly do you get from the tarmac to the big city just across the way? We’ve created a nifty guide to help you out.

If you’re after the cheapest option to get from Heathrow to London, catch the London Underground Piccadilly Line from Heathrow to London’s Paddington Station. You can purchase tickets from the self-service ticket machines that line the terminal buildings, which are often quicker than buying at the train station.

Get to London swiftly when you take the Heathrow Express, which only takes 15 minutes to go from the runway to the city. As a bonus, there are departures every 15 minutes, so you never have to wait too long between rides. That said, this is the most expensive public transportation option.

Using the same route as the Heathrow Express, the Heathrow Connect makes a few local stops along the way to Paddington Station, making the journey longer than the Express. The Heathrow Connect departs from the airport every 30 minutes from the main transport hub between Terminals 2 and 3, and makes stops at Ealing Broadway, West Ealing, Hanwell, Southall, Hayes & Harlington, and Paddington. This is the best option if you’re making suburban stops and don’t mind the scenic route.

The price of the National Express bus is slightly less expensive than a ticket on the Underground, though you risk hitting traffic on the way to city centre. The bus leaves roughly every 15-20 minutes during peak hours and every 60 minutes in the early morning and late night. You can catch a ride from Terminal 2 and 3 at the main transport hub.

Need to get somewhere in a zip? Taxis are available outside each terminal, and all of them provide wheelchair access.

Alternative Options to Get From Heathrow to London

The following options can be pricey, but still offer an easy means of travelling into London.

Bus and Coach – All coaches and buses to London are located at the central bus station a short walk from Terminals 2 and 3. The bus station is open 24 hours a day, and the travel centre is open from 6am to 10:30pm.

EasyBus – This ride costs a little more than the National Express and leaves every 30 minutes from Heathrow Airport to Shepherd’s Bush Station and continues to Waterloo Station.

Night Bus N9 – If you’re arriving at twilight, the Night Bus is your best public transportation option. It departs every 30 minutes from the central bus station outside of Terminal 2 and 3, and is available from 11:30pm through 6:30am.

Time it Takes to Travel From Heathrow to London

Depending on your ride (and traffic), you can expect anywhere from a 15 to 60-minute journey into London. For instance, the Heathrow Express will take roughly 15 minutes to get into the city, whereas the London Underground can take up to 45 minutes, and a taxi can take up to an hour. 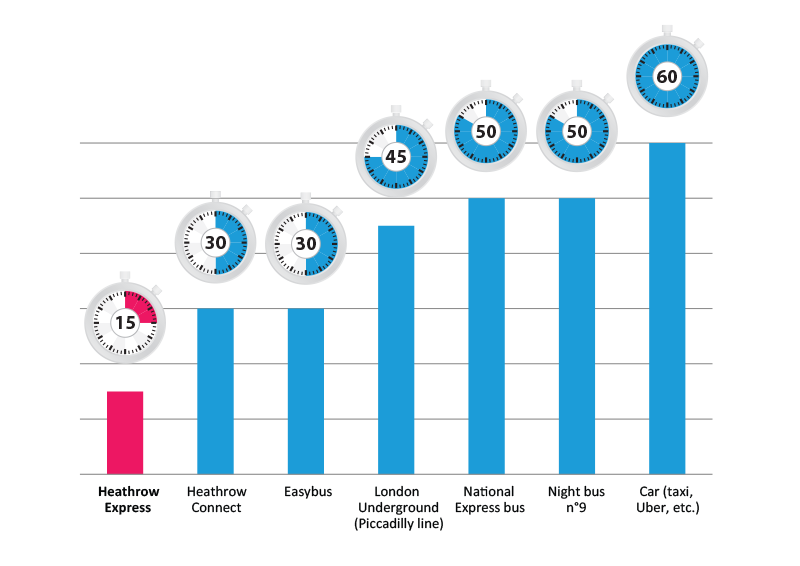 You’ll also want to factor in frequency of pick-up when deciding your mode of transportation. Some options, like the Piccadilly Line, picks up every 5 minutes, whereas options like the Heathrow Connect will arrive every 30 minutes.

How much does it cost to travel into London from Heathrow? Prices vary, based on time of day and which set of wheels you’re counting on. For instance, the London Underground will run you anywhere from £5-£8.90, while you could be looking at £6 for the National Express Bus, or anywhere from £22-£54 for the Heathrow Express. 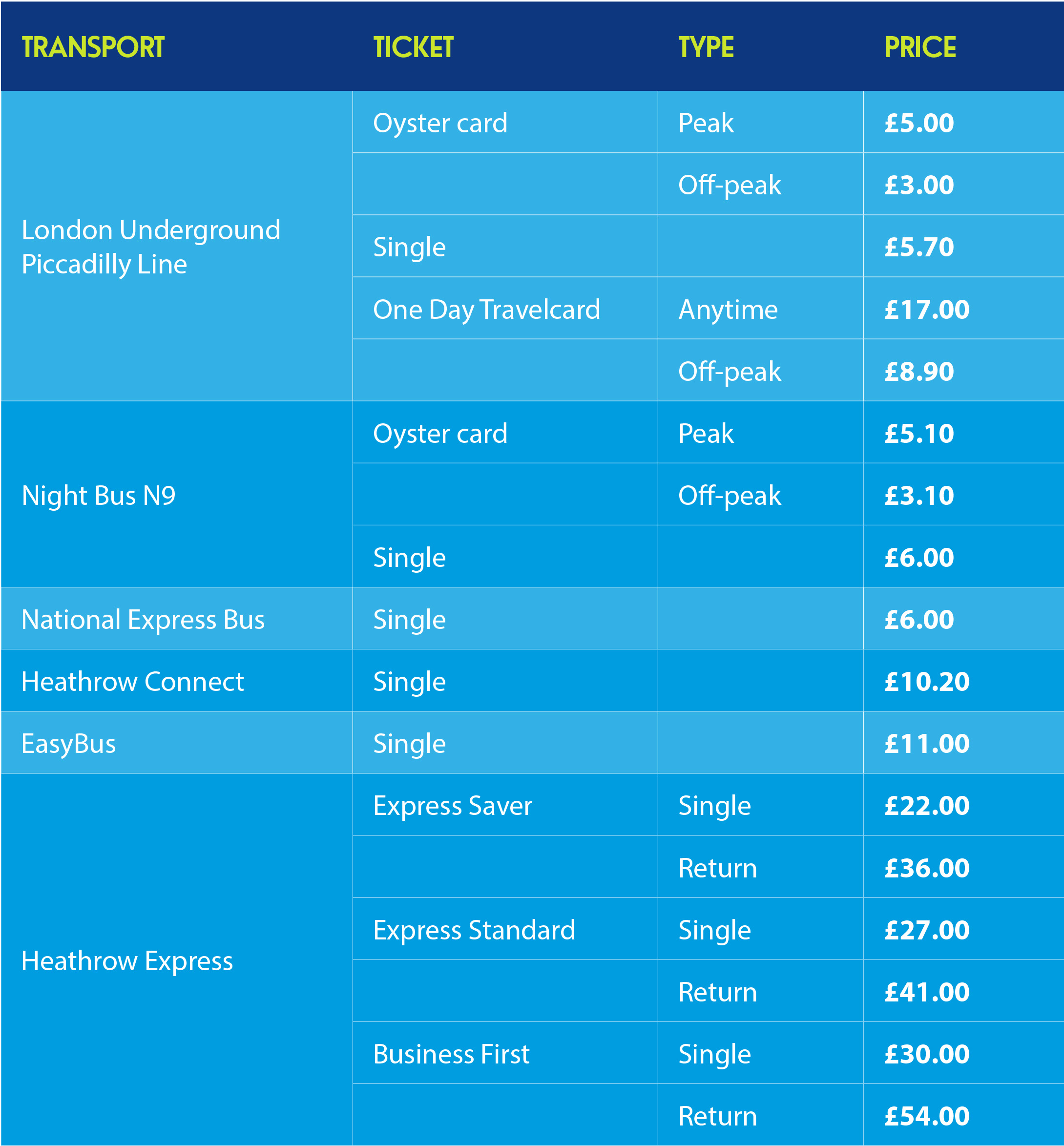 How to Get from London to Heathrow Airport

Once it’s time to mosey back to Heathrow from London, these are your top transportation options.

Heathrow Express – This is the fastest, most direct route to Heathrow Airport, and departs from the Paddington Station. From there, you’ll have access to all five terminals within the airport.

London Underground – Taking the Piccadilly Line to Heathrow is far cheaper than the Heathrow Express, though you can expect an hour trip versus a 15-minute ride. The train will take you to direct stops at Terminals 2 and 3.

For even more tips of how to travel to Heathrow from London, check out our video!