Marathons are the ultimate endurance test, physical and psychological, yet running through endless roads and parks can be monotonous. Why not change it up with runs through vineyards, or perhaps, on frozen water? From the Great Wall of China to northern Scandinavia, where the sun never sets in summer, we bring you 10 of the strangest marathons on the planet....

Marathons are the ultimate endurance test, physical and psychological, yet running through endless roads and parks can be monotonous. Why not change it up with runs through vineyards, or perhaps, on frozen water? From the Great Wall of China to northern Scandinavia, where the sun never sets in summer, we bring you 10 of the strangest marathons on the planet. 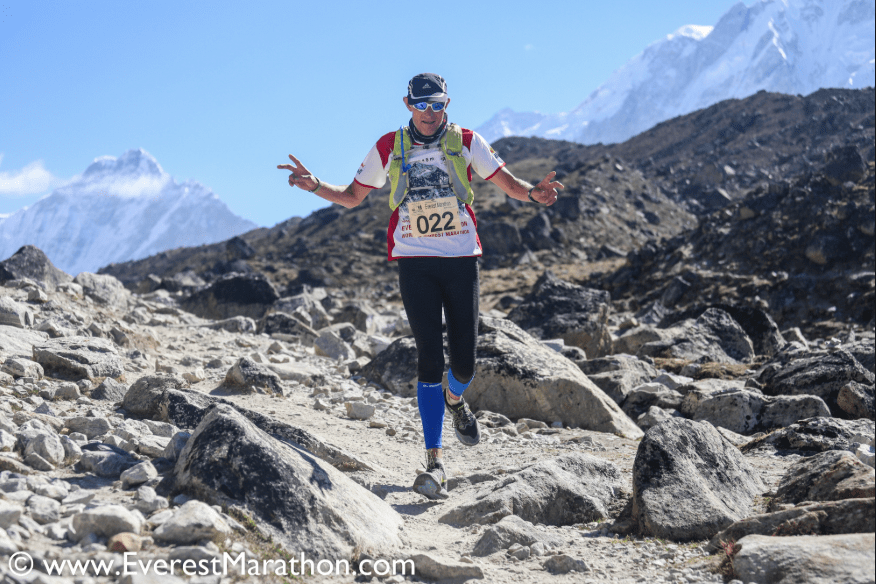 This marathon commemorates Tenzing Norgay and Edmund Hillary’s historic ascent to the summit of Mt. Everest on 29 May 1953. Held on the same day, 29 May, each year, participants must hike for two weeks just to arrive at Everest Base Camp, where they’ll stay overnight before commencing the race the following morning. There’s a half marathon, full marathon and an extreme ultra marathon option, though all are extremely challenging, crossing rivers, suspension bridges and rocky sections. The reward? Breath-taking views of snow-capped peaks and the rush of scaling the highest mountain in the world.

Man vs. Horse puts to the practice to age-old bet of outrunning nature’s beasts – each June, runners compete against riders on horses in Llanwrtyd Wells, a small town in Wales, cutting through forest paths and grassy pastures and trotting ankle-deep – or hoof deep – in gushing streams. Since the race’s inception in 1980, humans have only outrun horses twice, in 2004 and 2007. The marathon is on 8 June this year, and all eyes are on the prize money, which rolls over every year a human doesn’t win. 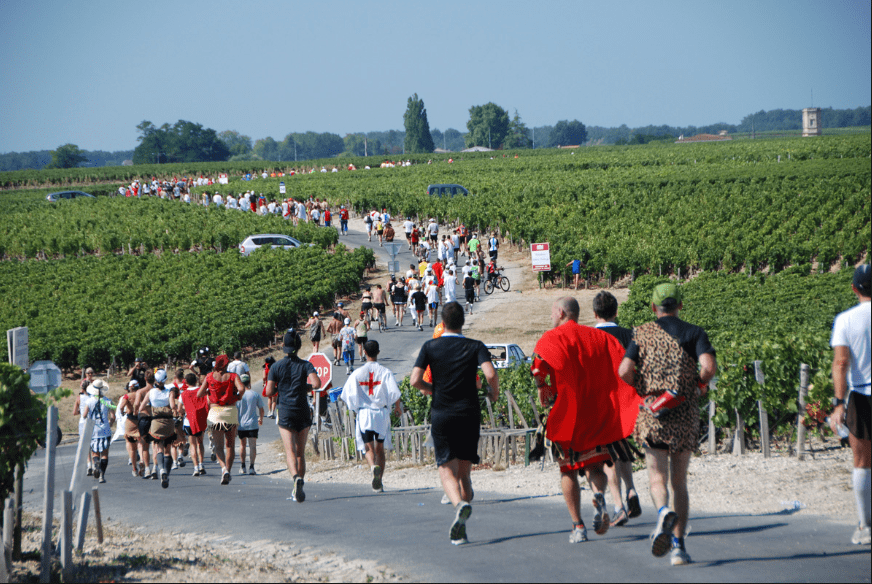 Put on your best pink tutu, peacock feathers or Viking hat and get ready to run – and drink! Held on 7 September – just in time for wine harvest – Marathon du Médoc brings contestants to more than 30 vineyards in the wine region of Médoc in France, north of Bordeaux. They’ll stop for as many wine, oyster, foie gras and even steak tasting sessions as they can before the 6-hour, 30-minute cut-off time, all the while being serenaded by orchestras dispersed throughout the vineyards. 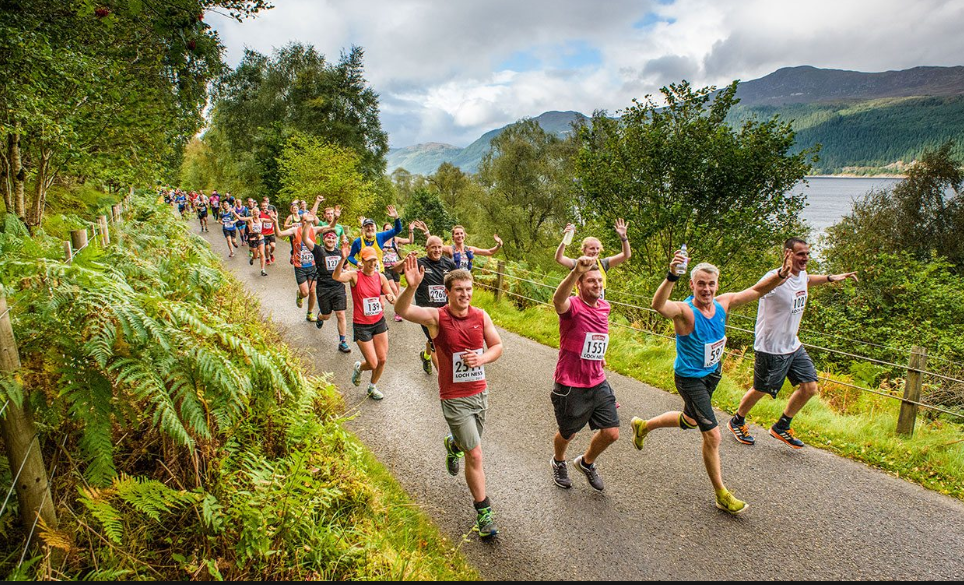 The Loch Ness Marathon, which takes place on 6 October this year, might just be your best chance to see the Loch Ness Monster. The race snakes around Scotland’s famous loch and ends at Inverness, passing by farms and residential homes, with long stretches of nothing but mist-covered conifers and trees tinged with autumn colours. There’s also an 800m Wee Nessie run for children under five. And if you don’t spot Nessie, a smiling, inflatable version of her greets runners at the finish line. 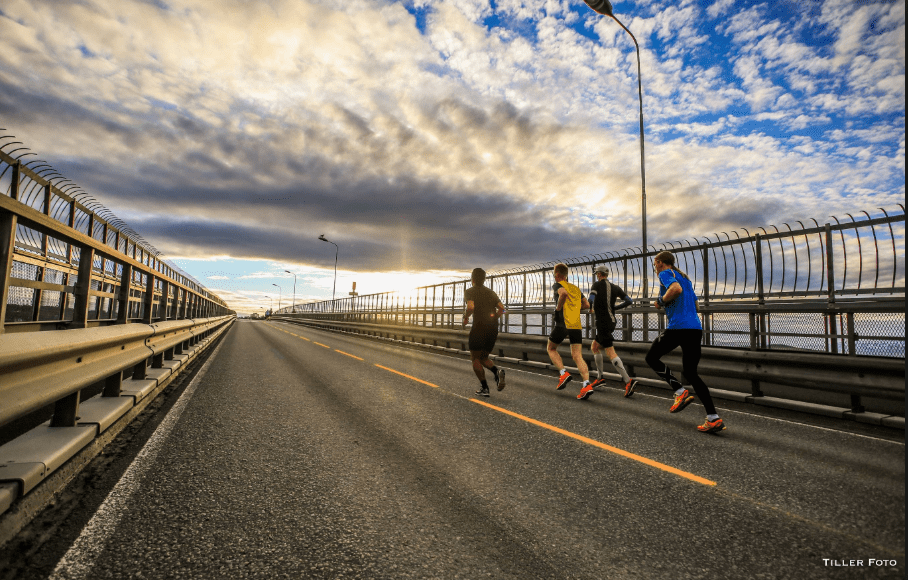 In the summer, the sun never sets – literally – in the northern Norwegian town of Tromsø, and running pass snow-capped mountains, fjords and the Norwegian Sea lit up by the sun’s yellow-red glow is quite the surreal experience. The Midnight Sun Marathon kicks off at 8:30pm on 22 June and challenges contestants to finish by midnight. The route is absolutely stunning and also zips through major architectural landmarks such as the triangular-prism-shaped Arctic Cathedral and the Polaria aquarium, which is notable for its domino-like façade. 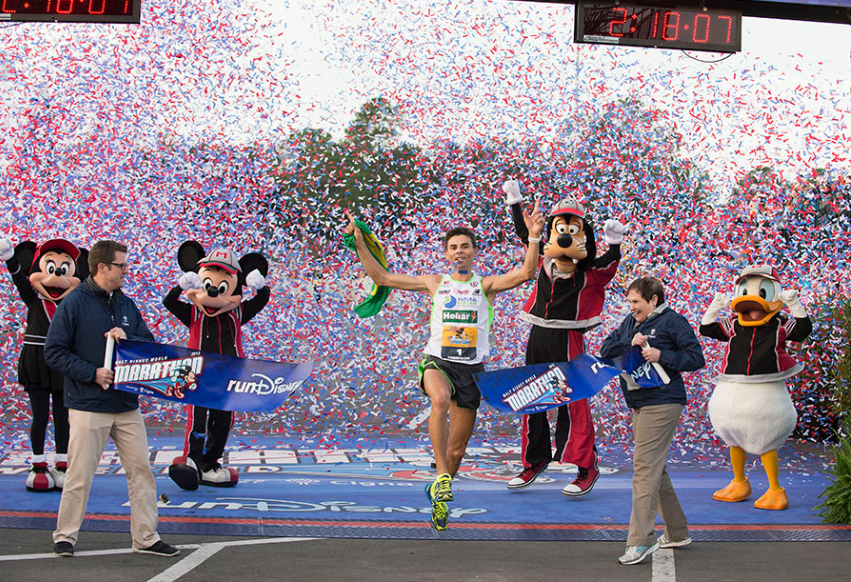 Don’t be fooled by the sea of frilly princess dresses and Minnie Mouse ears swarming through Cinderella’s Castle – the Walt Disney World Marathon is designed to get the heart pumping. Contestants can sign up for different types of races over 8-12 January 2020 at Orlando’s Walt Disney World Resort, including a four-day Dopey Challenge and a two-day Goofy’s race. The races cover all four theme parks – the Animal Kingdom, Epcot, Magic Kingdom Park and Hollywood Studios – as well as the ESPN Wide World of Sports Complex. 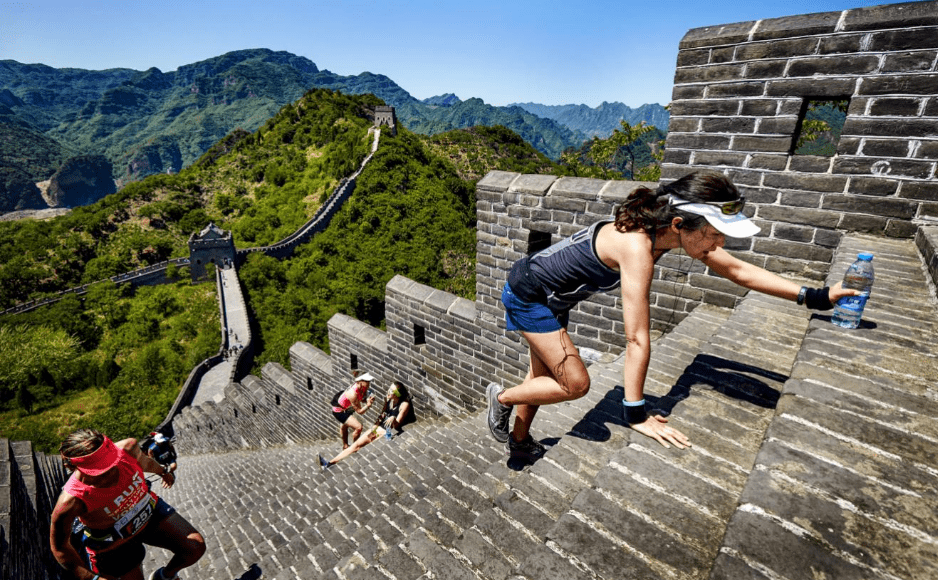 The Great Wall Marathon is coming up fast, on 18 May, and consists of over 5,000 steps on the Huangya Pass in Tianjin. This section of the Great Wall of China is so steep it sometimes requires runners to perform maneuverers more akin to rock climbing, but the view of endless mountain ridges and centuries-old, secluded villages is phenomenal. The race starts and finishes at Yin and Yang Square and covers fortress walls high up on the wall and dirt paths in villages below. 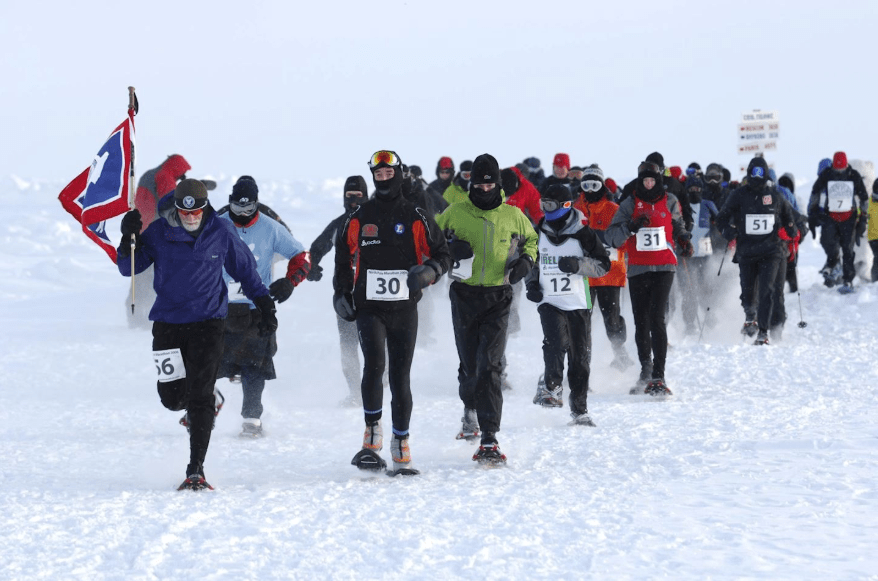 This otherworldly race does not take place in an actual country – on 9 April 2020, contestants will fly into Svalbard, in the Norwegian archipelago, then board a helicopter to Barneo, the floating North Pole Camp. Here, they’ll run about 10 circular loops on ice drifting on the Arctic Ocean in -30°C weather while enjoying the feeling of being on top of the world – literally – before crossing the finish line at the geographic North Pole, where all the lines of longitude meet. 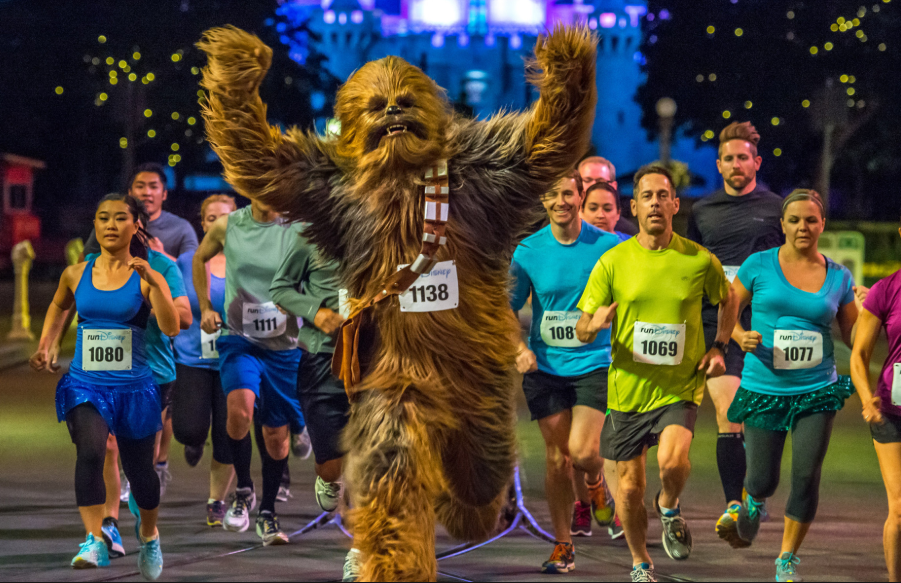 Get your geek on at the weekend-long races on 16-19 April 2020 at Walt Disney World Resort in Orlando. The various races range from a two-day Star Wars Rival Run Challenge to a Diaper Dash for babies under 12 months. Or you can also sign up to be part of the ChEAR squad and cheer runners on with cowbells and pom poms – those braving the heat in Jedi robes and Chewbacca or Darth costumes will especially need the extra encouragement. 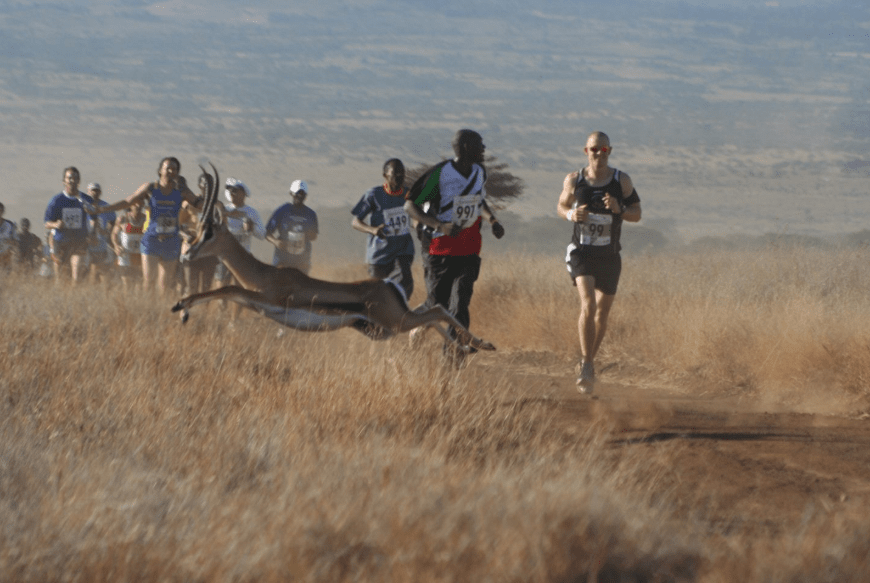 Contestants will run alongside giraffes and antelopes in this marathon in the Lewa Wildlife Conservancy, north of Nairobi, Kenya, on 29 June. Though the race is smack in the middle of a gorgeous expanse of yellow grassland part of the 62,000-acre game reserve, the route is perfectly safe and always patrolled by armed rangers – stay on course and only use designated restrooms. Also, be careful not to harm the endangered black rhino. Proceeds from the marathon go to community projects in Kenya.