Itching to travel after months of quarantine but still worried about facing crowds of people? At these, some of the most remote but beautiful spots in Britain, physical distancing goes with the territory St Kilda, Outer Hebrides, Scotland Britain's not Bangladesh, the most crowded land on Earth, nor even the Netherlands – the most jam packed in Europe – but...

Itching to travel after months of quarantine but still worried about facing crowds of people? At these, some of the most remote but beautiful spots in Britain, physical distancing goes with the territory

Britain’s not Bangladesh, the most crowded land on Earth, nor even the Netherlands – the most jam packed in Europe – but nor are we the most blissfully unpopulous country on the planet, Greenland. Ordnance Survey data revealed recently that you’re never more than six miles away from a road on the British mainland, which makes somewhere like St Kilda all the more tempting – especially when the proximity of other people has taken on such an unexpectedly tense dimension.

These wallflower isles, perched stand-offishly 100 miles from Scotland, are the most isolated in Britain. Peopled since the Bronze Age, the last few dozen inhabitants of St Kilda finally sickened of the weather and failing crops and shipped out in the 1930s. Yet the islands still attract visitors lured by their stark, remote beauty: they also represent the antithesis of being locked down indoors with your immediate family.

As well as viewing puffins, guillemots and other seabirds in, literally, their millions, you can visit an abandoned village on St Kilda to get a taste of the departed islanders’ ultra-independent life.

Over the Irish Sea, the Mourne Mountains offer yet more splendid isolation. Not only promising a decent getaway, the highest peaks in Northern Ireland were the unspoilt shooting location for several episodes of Game of Thrones.

Yellow gorse, granite and simple stone cottages characterise the lowlands of one of the loveliest landscapes in the province. Giant granite boulders speckle the foothills of peaks such as Slieve Donard, the tallest mountain and a challenging climb.

Walks through the bog cotton and heather surrounding the Mourne Mountains hold out less strenuous rewards. It’s a terrain that inspired another otherworldly work, CS Lewis’s Narnia novels – their author saying the surrounds made him think that “at any moment a giant might raise his head over the next ridge”. 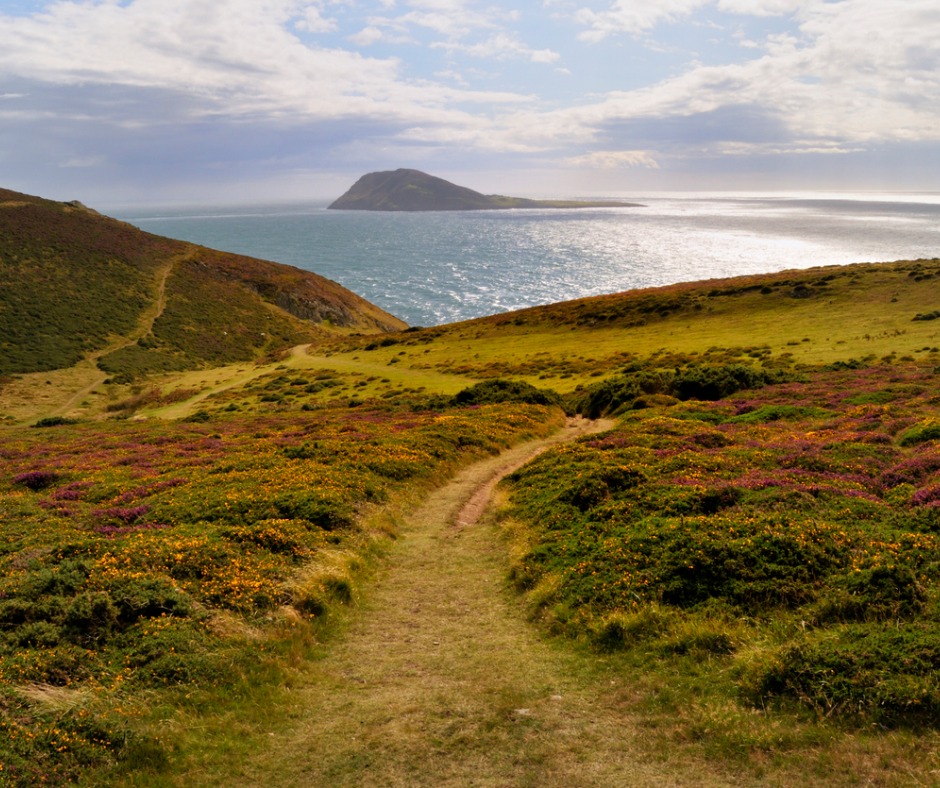 Skipping back over the water – and when, not too long from now, Wales starts welcoming visitors again – you might want to get away from it all on this speck of a spot at the tip of the Llyn Peninsula. And get away, perhaps, from everyone: about one mile by half, Bardsey Island has a population total of about four.

Which, given the territory we’re talking about, is actually not too sparse, and no wonder: Bardsey has lots going for it, in a far-flung way, as the Celtic monks and later pirates who hung out here apparently recognised. Those early colonists left evocative ruins, plus there’s a jaunty striped lighthouse and a profusion of wildlife including a seal colony, migratory birds resting up and, for those into that sort of thing, rare lichen.

Flat Holm is barely a frantic row from Cardiff in the Bristol Channel but, pulling up on the beach here, you could be in your own, very isolated country. The military fortifications on the island have a decided ‘keep out’ quality, reminding you that smugglers also long favoured the tax advantages of this compact, inaccessible isle: an old mine shaft on Flat Holm is said to offer a scarper-route to a web of natural tunnels and hidden egress to the sea.

There’s a campsite and other simple accommodation, where your most numerous companions are likely to be wheeling black-backed gulls and there’ll be little to interrupt the reverie except for the occasional sounding of a magnificent two-pronged foghorn. 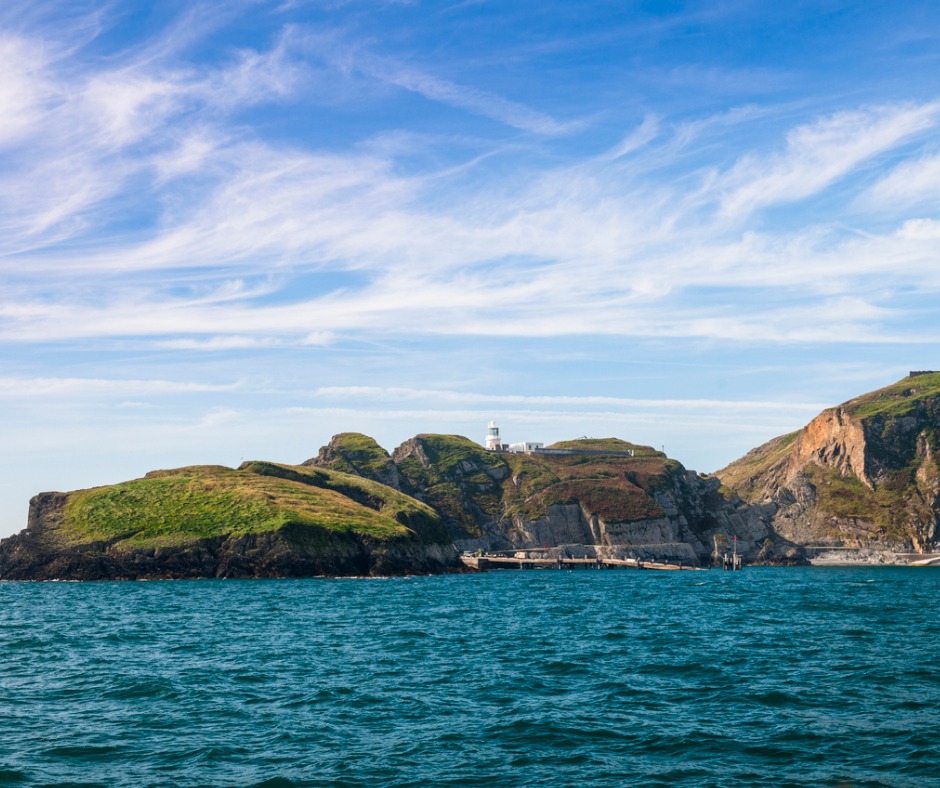 Further off the Devon coast lies this escapee’s escape, distant enough from the barely visible shore, a two-hour ferry ride away, to deter anyone without a decent adventurous streak. That leaves you, like as not, feeling as if you have this thin, three-mile long island to yourself. And what a dominion! There’s a 13th-century castle, mysterious standing stones, the island’s own breed of ponies, puffins clustering on 100m cliffsides, basking sharks cruising by offshore – and no cars.

Stay on a clear night – when accommodation opens up again – and you’ll witness a display of jostling stars rare in light-polluted Britain. 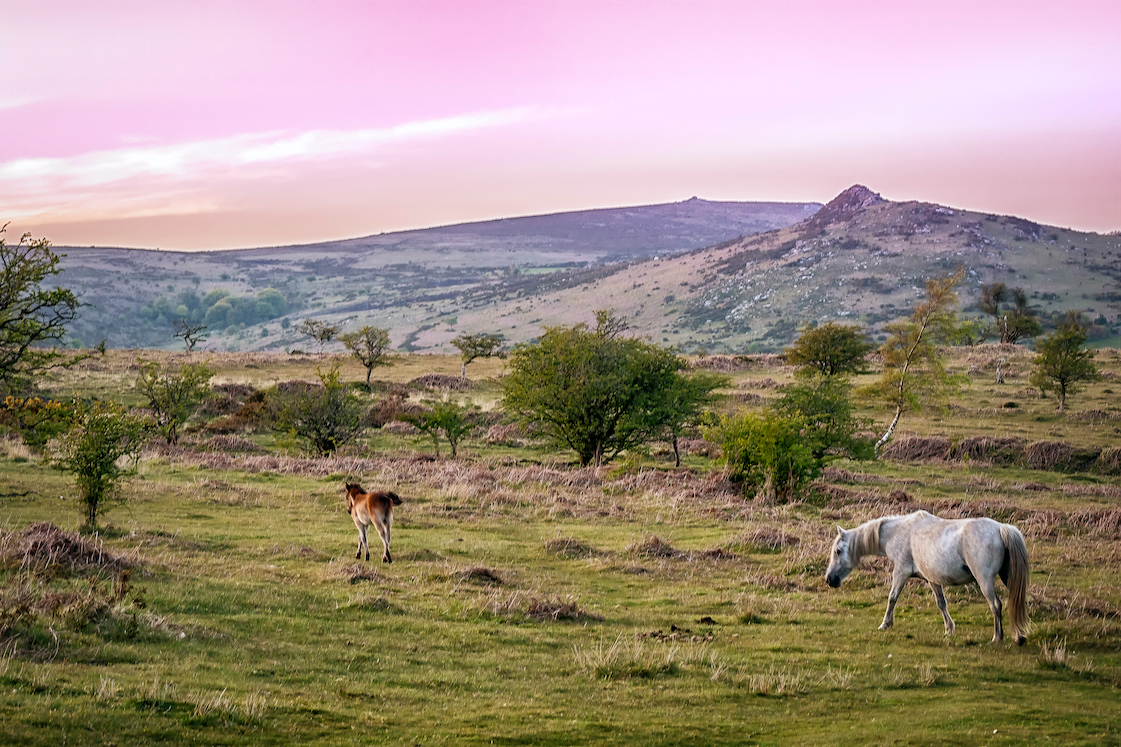 Back on the mainland now and heading inland, the vast sweep of Dartmoor is a reminder that wild Britain hasn’t been entirely ensnared by tarmac and smothered beneath superstores. As this national park becomes accessible once more (at the time of writing its car parks, but not its visitor centres, had reopened) you’ll again be able to amble through its 368 square miles with more chance of crossing paths with a pack of moorland ponies than of stepping awkwardly out of the way of fellow human beings.

Ample eminently solitary pursuits – hiking, cycling, kayaking – seem suited to this dramatic landscape of heathland and granite, as well as to the times.

The sheer slog of climbing the loftiest peak in the land thins out the crowds dramatically and, indeed, the ascend demands respect: plan ahead for the rain, snow, high winds and poor visibility the pike can throw at you in any season.

The rewards, though, are considerable if you climb the mountain with due respect: a god’s eye view of the legendarily lovely Lakes landscape, with likely only a few intrepid fellow admirers drinking it in.

You can only reach Northey by crossing a seaweed-slick causeway at low tide. Do it, and you’ll find a lonely, sea-wall encircled wilderness that the local tourist board winningly calls “the Wuthering Heights of Essex”. Hundreds of honking geese will likely be your main companions as you explore the site of Britain’s oldest recorded battlefield, where Earl Brithnoth of Essex (medieval scribes document no especially flashy amulet or piercings, but who knows?) faced off the amassed Viking “sea pirates” – and lost.