The UK's unusual coastline of jagged cliffs and thunderous waters conjures many images and island paradise may not be one of them. That's why we're letting you know of these secluded spots – including sunny coves, shipwrecked beaches and wonderful rock pools – to explore this summer. From Wales to the Lake District, keeping a social distance shouldn't be...

The UK’s unusual coastline of jagged cliffs and thunderous waters conjures many images and island paradise may not be one of them. That’s why we’re letting you know of these secluded spots – including sunny coves, shipwrecked beaches and wonderful rock pools – to explore this summer. From Wales to the Lake District, keeping a social distance shouldn’t be a problem at these characterful beaches. 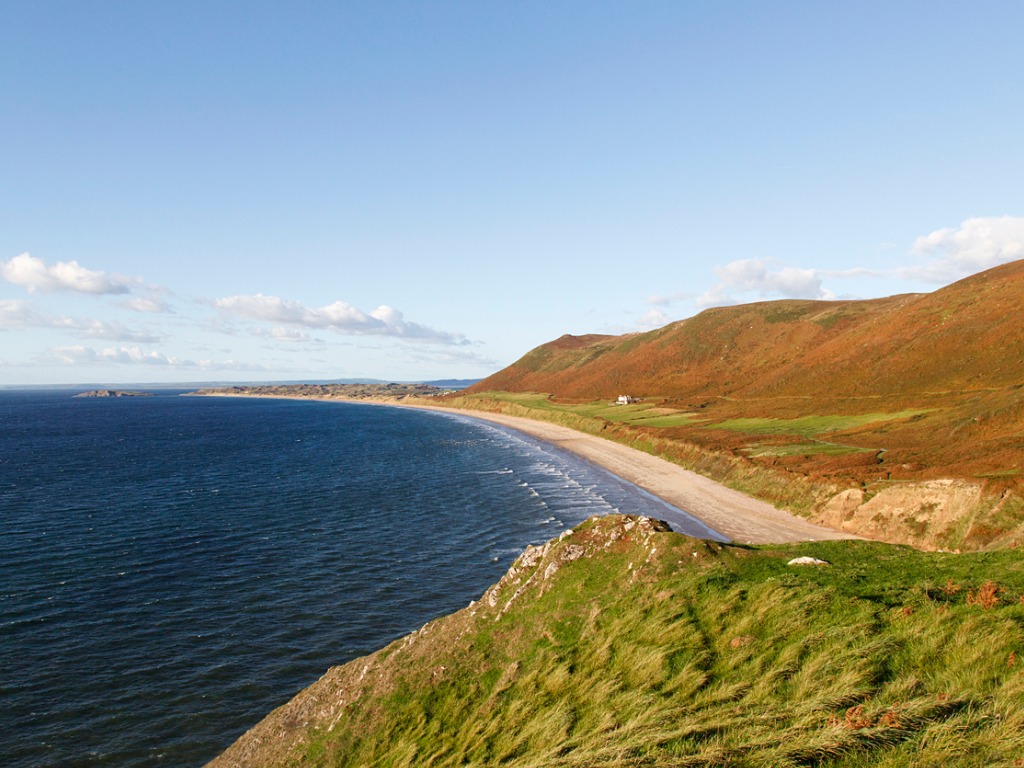 A hard-to-reach but spectacular sandy beach on the Glamorgan coastline, Fall Bay is hardly crowded except for the few die-hard surfers who come for the swells. Follow the path from Rhossili village hall car park through a grassy field with yellow wildflowers and down a steep, rocky descent into the bay. It’s well worth the trek as this area in Wales is a designated Area of Outstanding Natural Beauty and gorgeous it is. Be sure to visit during low-tide as the beach is submerged in high-tide. 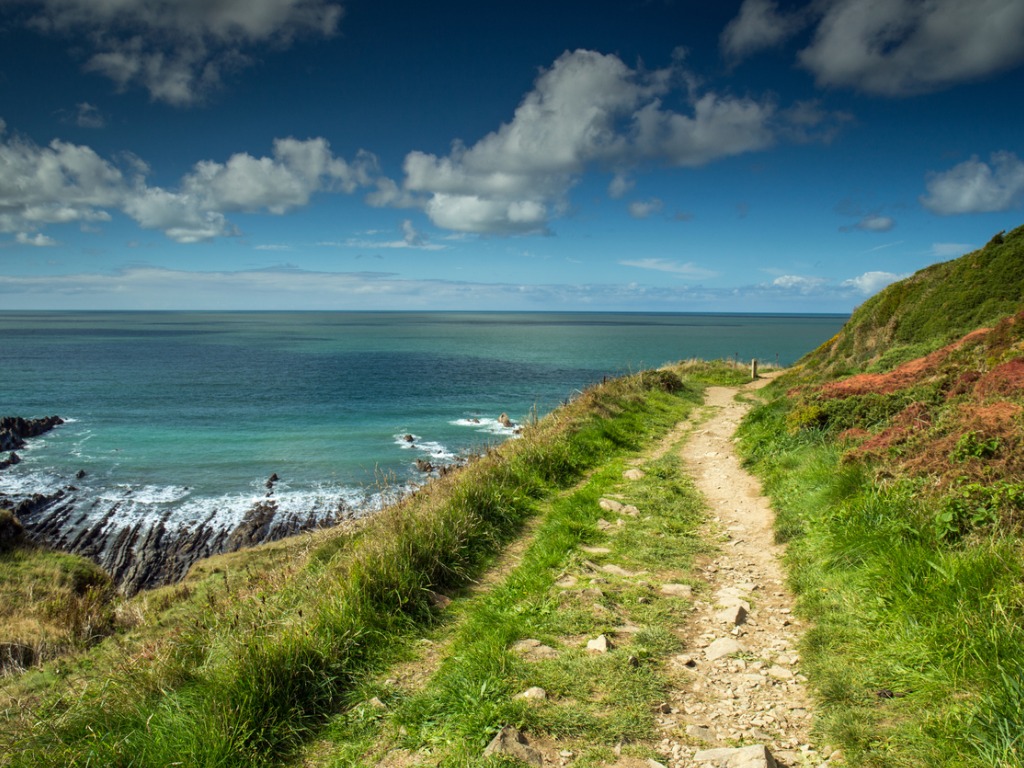 Speke’s Mill Mouth is just as characterful as its name suggests as this part of the Atlantic Coast is marked by tall, jagged cliffs and lashing waves. This no sundowner beach and in fact, many ships have been wrecked in this bay – instead, come here to soak in the dramatic scenery. A 20-minute walk from Hartland Quay will bring you to Speke’s Mill Mouth and its 60-feet high coastal waterfall with water raging down from the moorland to the shore. 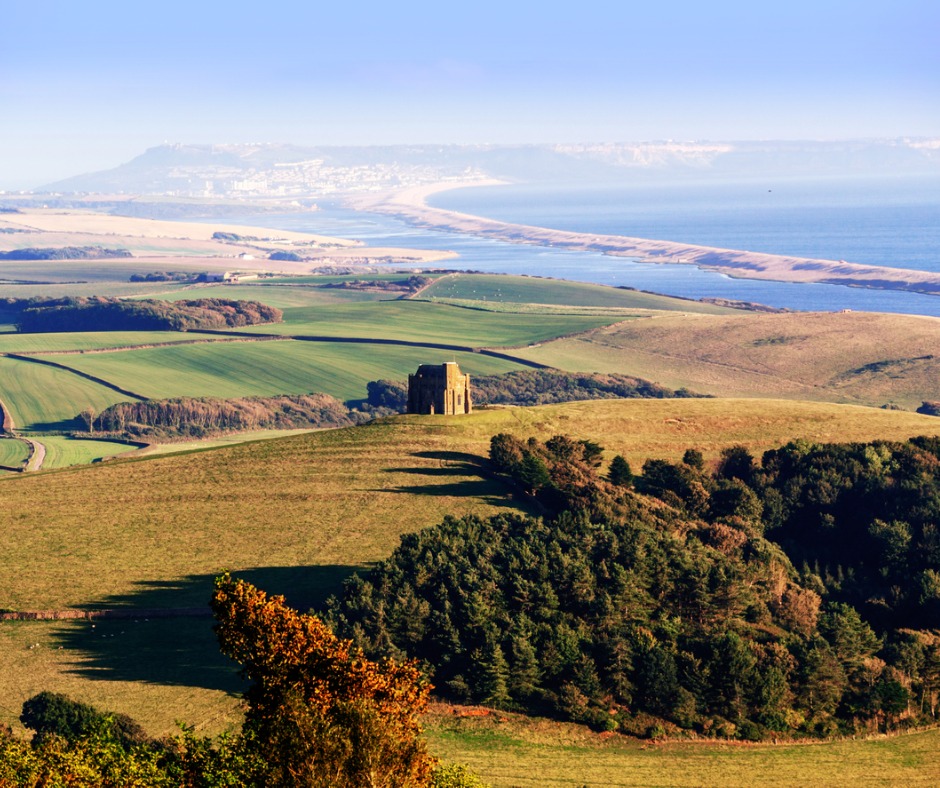 This long, narrow stretch of sublime pebbly beach – flint, chert and quartzite to be exact – in Dorset is moving. Literally. Technically a tombolo or a tied island, Chesil Beach is a few thousand years old – a youngster on the Jurassic Coast – and is moving inland at a rate of 5 metres a century. In the middle of Chesil Beach and the mainland is the saltwater Fleet Lagoon, though it’s expected that the beach will break apart one day and when it does, the lagoon will be gone, too. 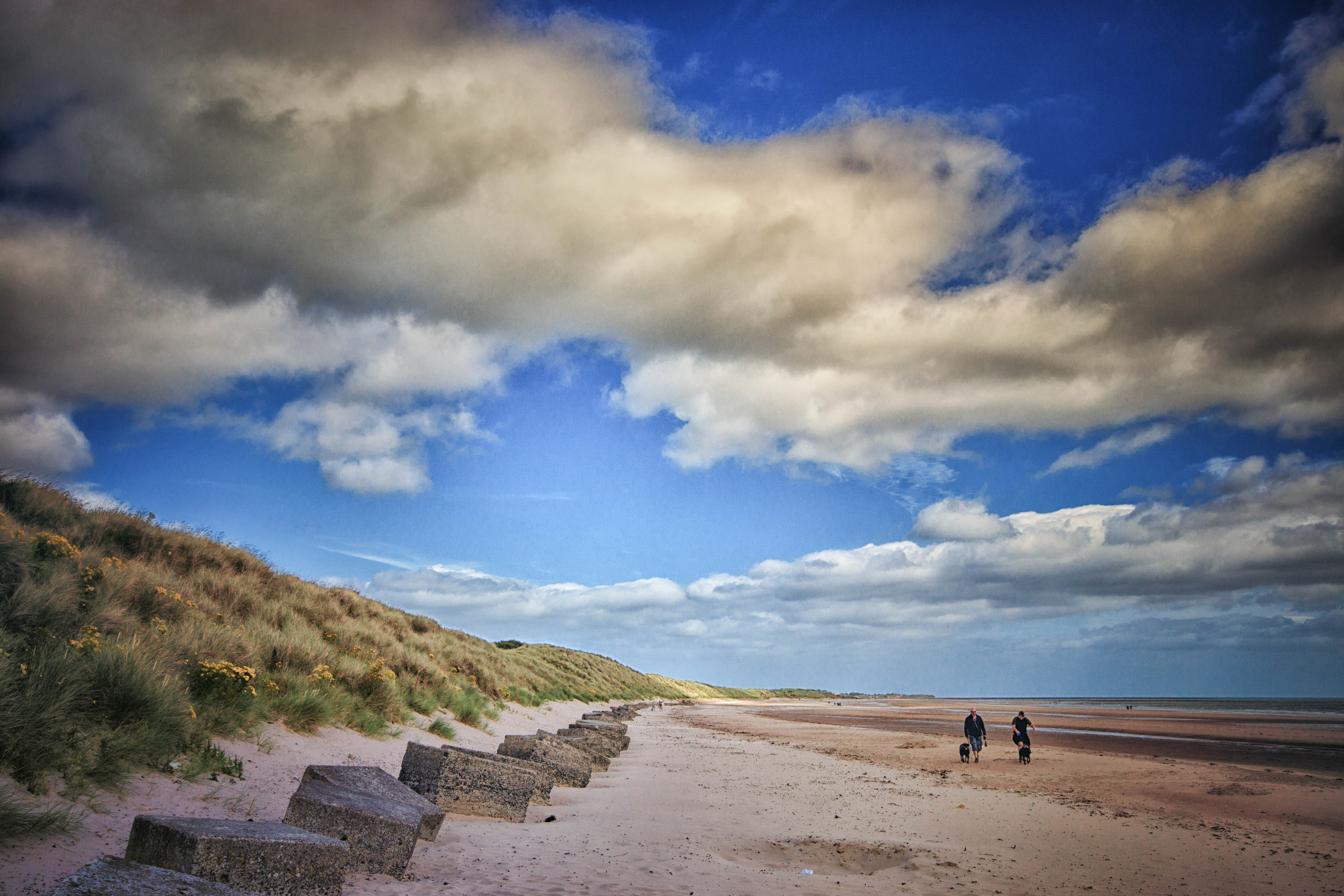 Druridge Bay, a seven-mile sweep in Northumberland is a gorgeous contrast of tall grass, sand dunes and near-empty shores with lapping waves. Hugged by woodland and pine trees, it’s as serene as it gets but the area near the bay was mined for coal in the 19thcentury and during World War II, anti-tank barricades – some of which still remain – were set up to prevent possible German invasions. The only visitors today tend to be wildlife and the occasional dog walker or kitesurfer. 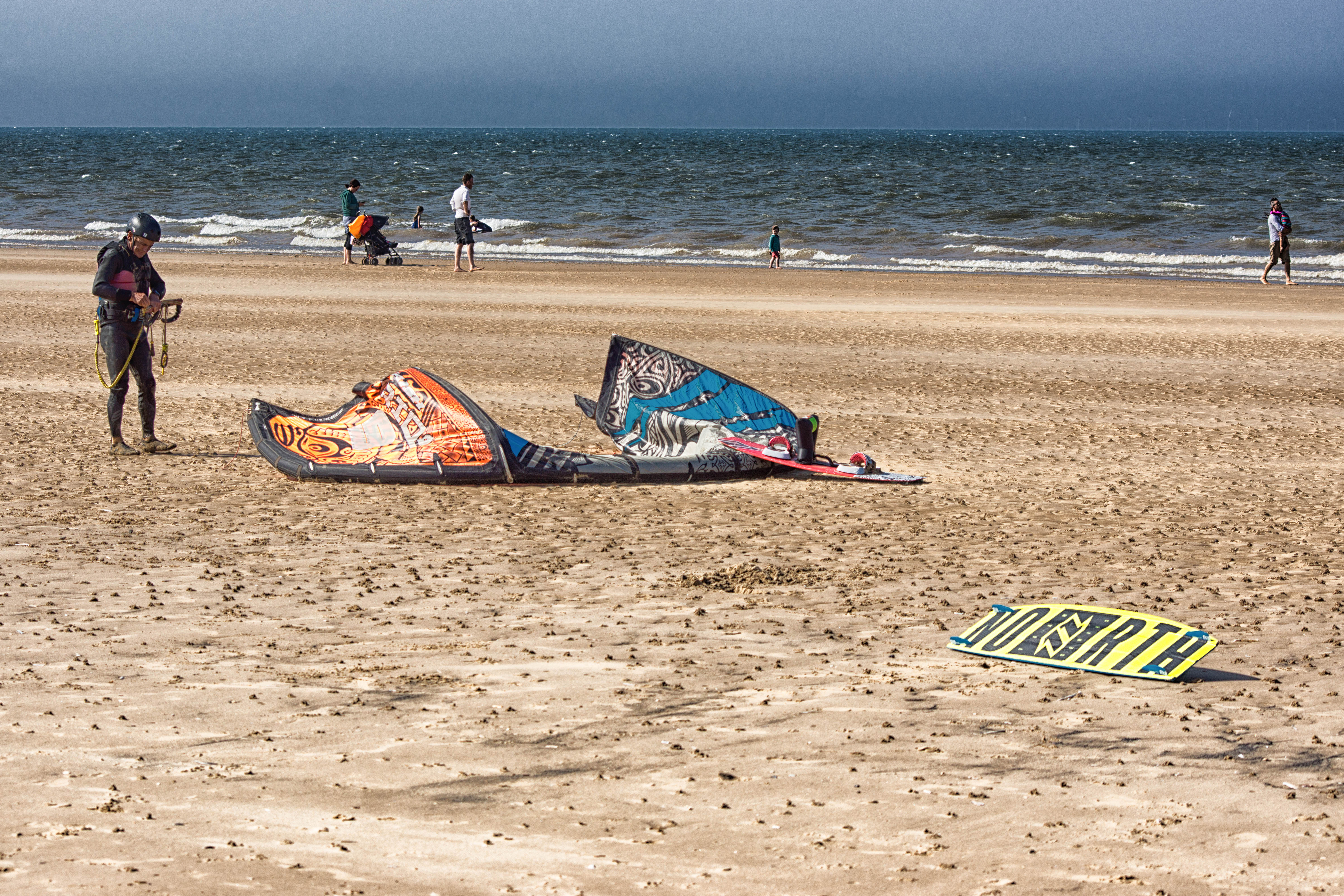 A golden stretch of shoreline framed by sand dunes along the Norfolk coast, Brancaster Beach offers water activities such as windsurfing, kitesurfing and sailing while remaining relatively peaceful. At low-tide, the remains of the barnacle-encrusted SS Vina, normally buried in the sandbank, emerges. The late 19th-century ship worked the Baltic trade route before the RAF used it for target practice during World War II. It’s best to admire the wreck from a distance though, rather than wade there at low tide since the sea can be unpredictable. 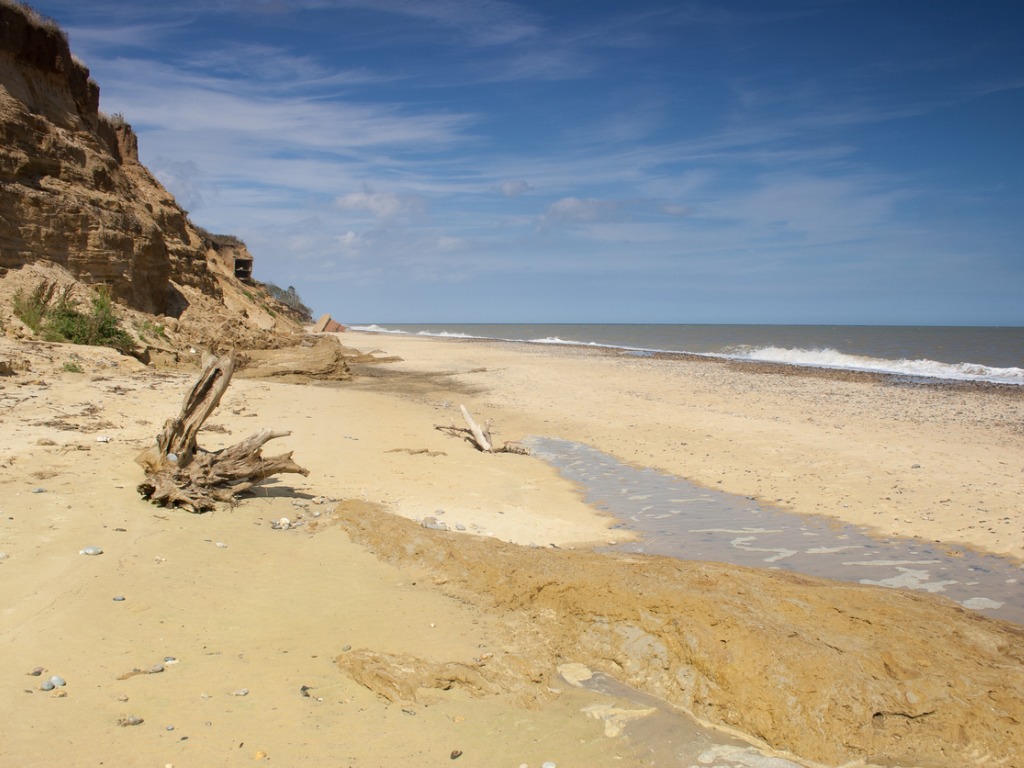 Below the skeletal-like remains of St Andrew’s Church and at the end of a path that stops suddenly at a cliff’s edge is the poetic Covehithe Beach. Dead trees and stumps, preserved by sand and seawater, rest on the beach. Once a part of the ever-crumbling cliff top, they now guard the North Sea coast, which is fast eroding in this area of Suffolk. It’s an eerie but wonderful beach to sit and contemplate, but just don’t visit during high tide as most of the beach will be washed over. 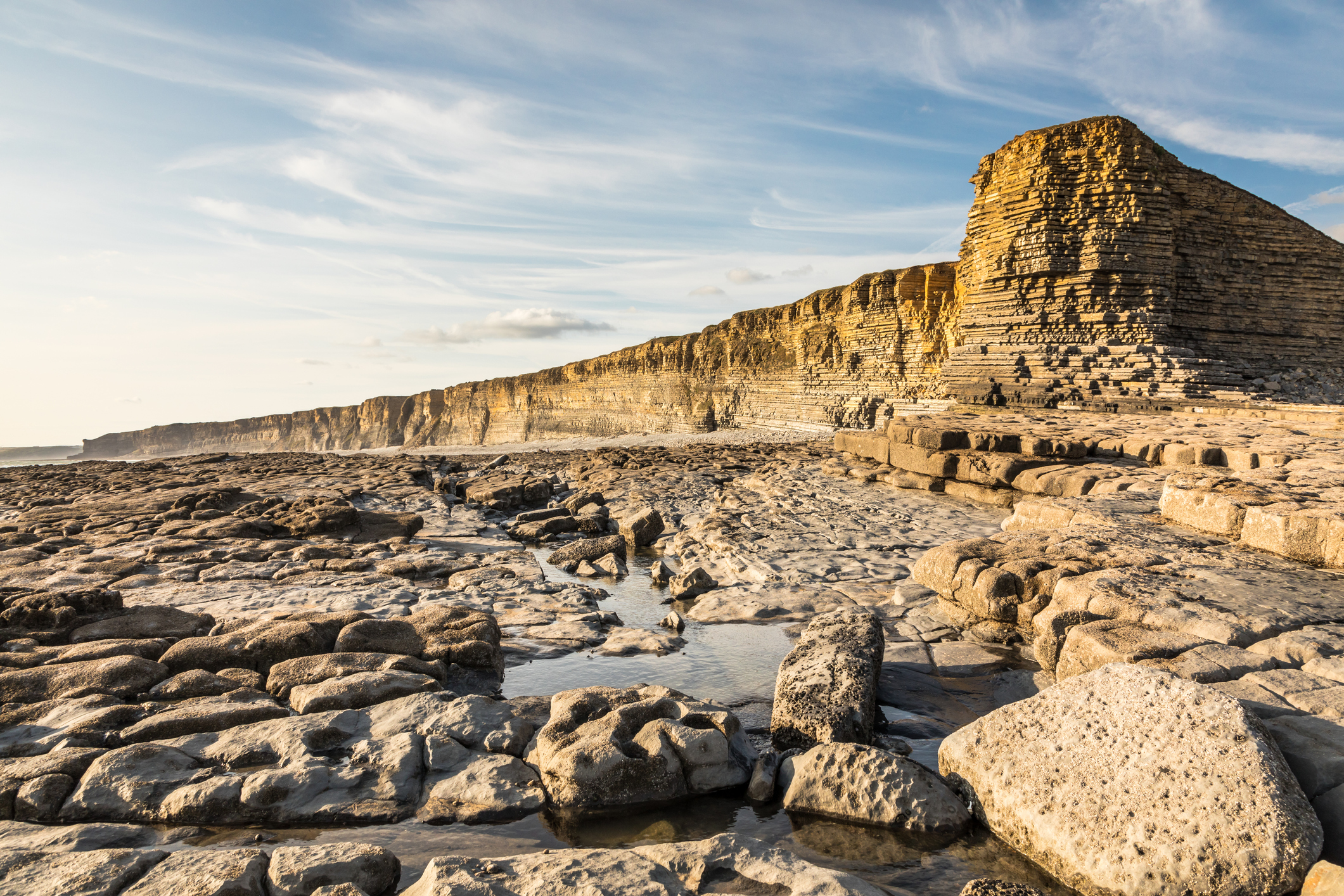 The English name is Newport Sands, but the Welsh name, Traeth Mawr, sounds more fascinating, even if it only means “Big Beach.” This former fishing town is much more exciting than a big beach, though, with its golden sands and sparkling turquoise waters backed by sand dunes and limestone strata that stretch into the sea. The calm waters and many rock pools here make it ideal for swimming and on especially beautiful days, some beachgoers take to sailing or kayaking. 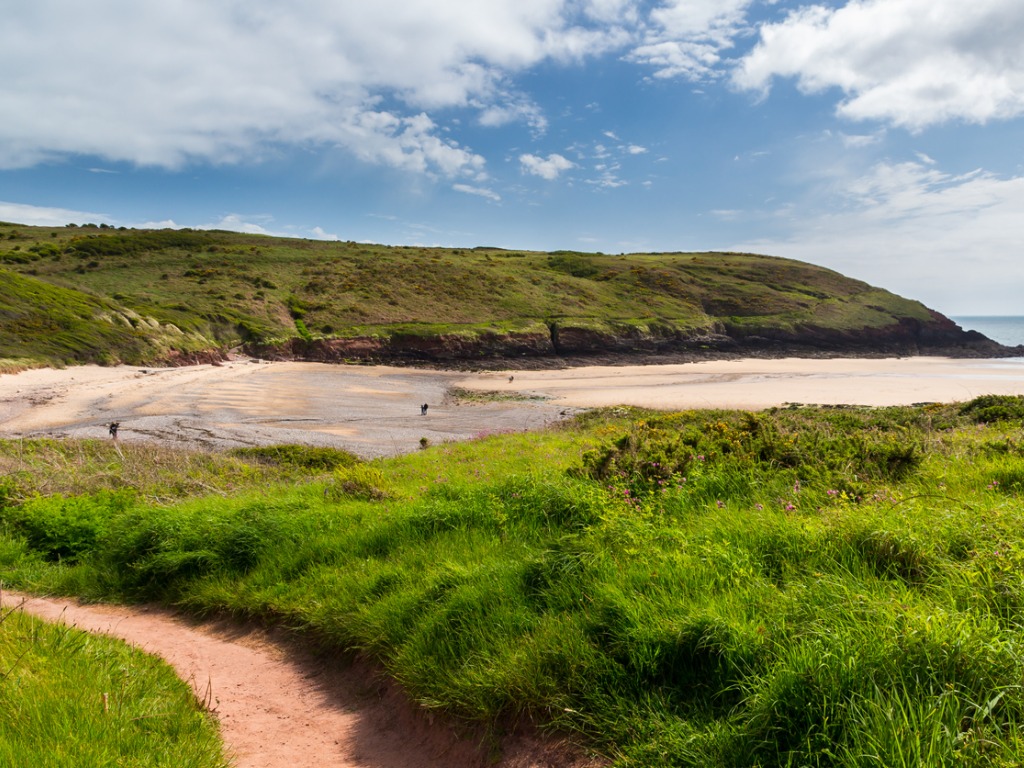 A limestone ridge separates these two coves though it’s easy to walk from one to another around the headland when the tide is far out. Church Doors can be reached by a set of concrete steps and a metal stairway. Once on the cove, a beach of algae-covered rock greets you. The unique feature is a tunnel or “door” in the headland that peeks out into the celestial blue waters. Skrinkle Haven, with its soft gold sand, is more suitable for sunbathing though both coves are wonderful for a dip, especially on hot, sunny days. 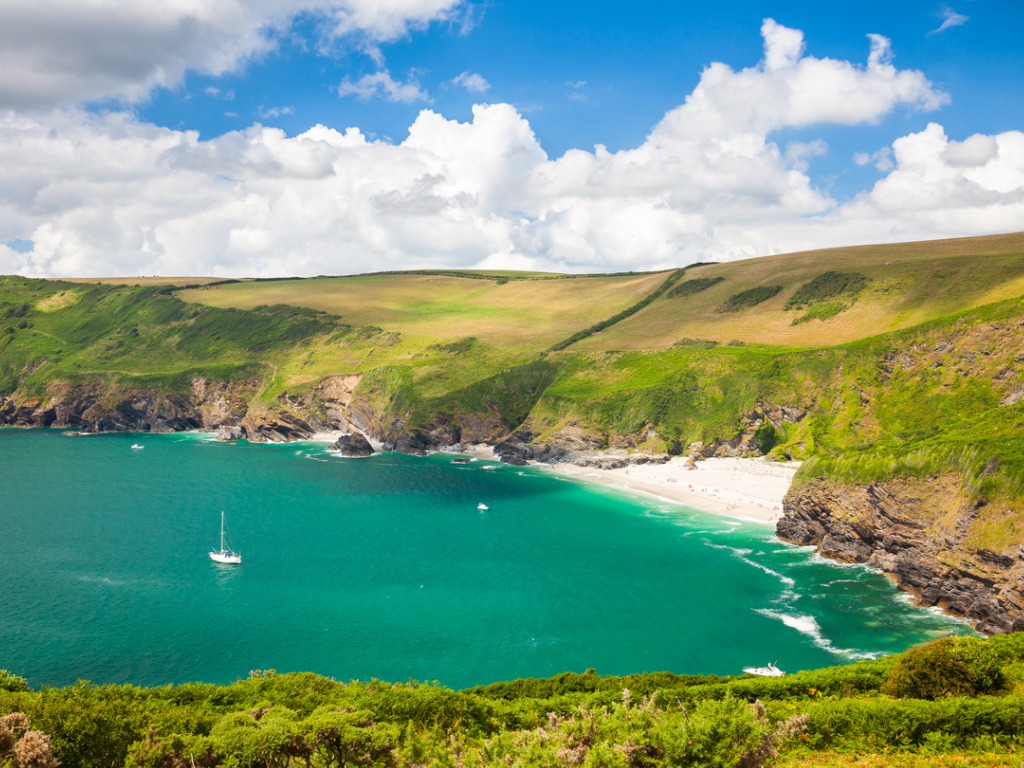 On a clear day, Lantic Bay appears as a montage of vast blue sky, grassy green cliffs, powdery white sand and enticing blue-green water. The beach is a little hard to find and difficult to access, which makes it more rewarding. There’s a steep path from the car park that leads downhill into gorse-covered farmland. Follow that for 20 minutes and the bay with its cove cut into the cliffs will present itself. Beware of swimming here, though, as rip currents can be strong. 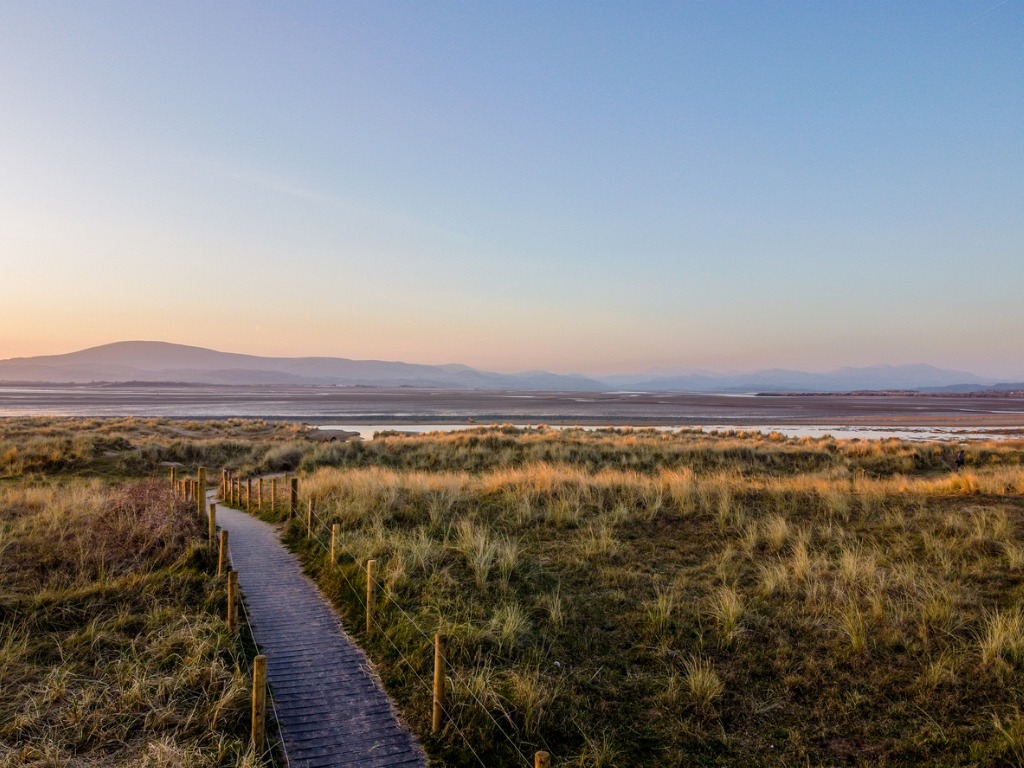 Nestled in the Lake District, Roanhead is less of a sunbathing beach and more of a spot to see rare and unusual plants and wildlife. Interesting fact: about 15 percent of the UK’s natterjack toad population lives here. It is a rare toad species with a yellow stripe down the centre of its back. Amphibians aside, this is a good place for golfing or fishing though strong currents mean it’s not ideal for swimming – better stick to frog watching. 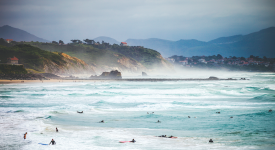 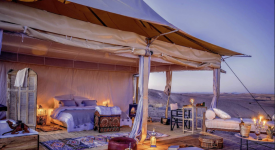