Whet Your Appetite for Travel with the Wanderlust Storybook For as long as people have had language, they've used it to tell stories. Before the advent of the written word, it was through these stories that cultures survived from generation to generation. In the many years between, they have grown and evolved and today embody the spirit, outlook and values...

Whet Your Appetite for Travel with the Wanderlust Storybook

For as long as people have had language, they’ve used it to tell stories. Before the advent of the written word, it was through these stories that cultures survived from generation to generation. In the many years between, they have grown and evolved and today embody the spirit, outlook and values of the cultures from which they originate.

We’ve picked and retold a scattering of stories from around the world, with stunning hand-drawn illustrations, to give you a glimpse into the variety of cultures that make up our global community. We hope it’ll help stir the wanderlust in you and get you excited to go out into the world to experience those cultures for yourself.

The Lake of the Returned Sword – Hanoi, Vietnam 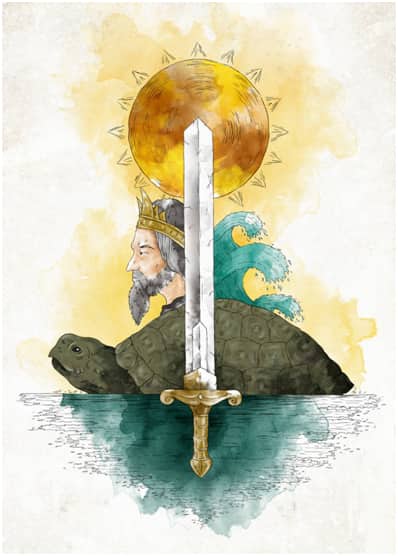 The turtle took the sword and vanished beneath the waves; only the gleam of the blade remains, spread over the water like a translucent film of fire. King Le Loi spoke: “Let this lake be renamed Hoàn Kiếm” which means The Lake of the Returned Sword.”

Art-filled and motorbike-fuelled Hanoi has been Vietnam’s capital since the north and south of the country reunified in 1976. The physical and cultural heart of the city is Hoan Kiem Lake.

You won’t need directions to find the Lake: It stretches for one mile southwards from the lively shops and grand hotels of the Old Quarter. From its green waters rise two islands, the larger of which—Jade Island—is reached by a bright red wooden bridge. 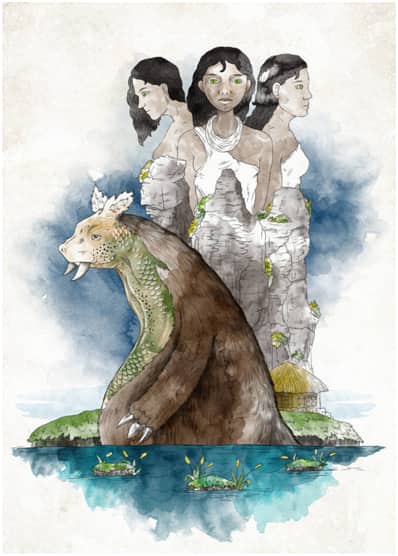 “And towering above, the three sisters clutch at empty pockets of sky, their bodies underground reaching for breath. They mourn with the heavy silence of rock, waiting for the day when they may they may return to sing and dance and laugh again.”

It’s a 90 minute drive from downtown Sydney to the Three Sisters. These towering rock formations are just a tiny part of the Greater Blue Mountains World Heritage Area—a name derived from the bluish tinge observed across the landscape when the eucalyptus release warm oils into the atmosphere.

The Three Sisters—each stretching nearly a kilometer into the sky—stand watch over the lands of the Darug, Wiradjuri, Dharwal and Gundungarra Aboriginal people. The latter are the site’s traditional custodians, and it’s their dream-time legend that paints the formations as petrified girls

Legends and folklore reveal the nuances of a culture, locating a people’s history in their homeland, shaping their norms and relationships. Learning the stories of a people is as integral to travel as learning language or custom. It is part of the journey.

Delve into the Wanderlust Storybook for more tales and legends from around the world.