A subtropical Portuguese island off the coast of North Africa, Madeira is synonymous with Madeira wine, but it also has a beautiful coastline with pebbly beaches and natural saltwater pools backed with rugged mountains that teem with waterfalls and ancient forests. Once sustained by banana and sugar cane plantations, Madeira's historic towns keep old traditions such as basket weaving and tile-making alive. This history and nature are incorporated into the ethos and design of Madeira's best beach hotels, which offer sweeping views of the North Atlantic Ocean as well.

Sprawled across the quiet, dramatic south coast of Calheta – which means “small bay" – the 243-room resort is framed by mountains and ocean. On the opposite coast from the airport, Calheta is a charming old town dating back to the 1430s and Saccharum is built on an old sugar cane plantation, something which inspires the hotel's interior design. For instance, in the enlarged photos of sugar canes on sleek headboards in guestrooms. The hotel's best feature, however, is the inviting infinity pool that hovers above the sea, one of four swimming pools that guests can choose from. 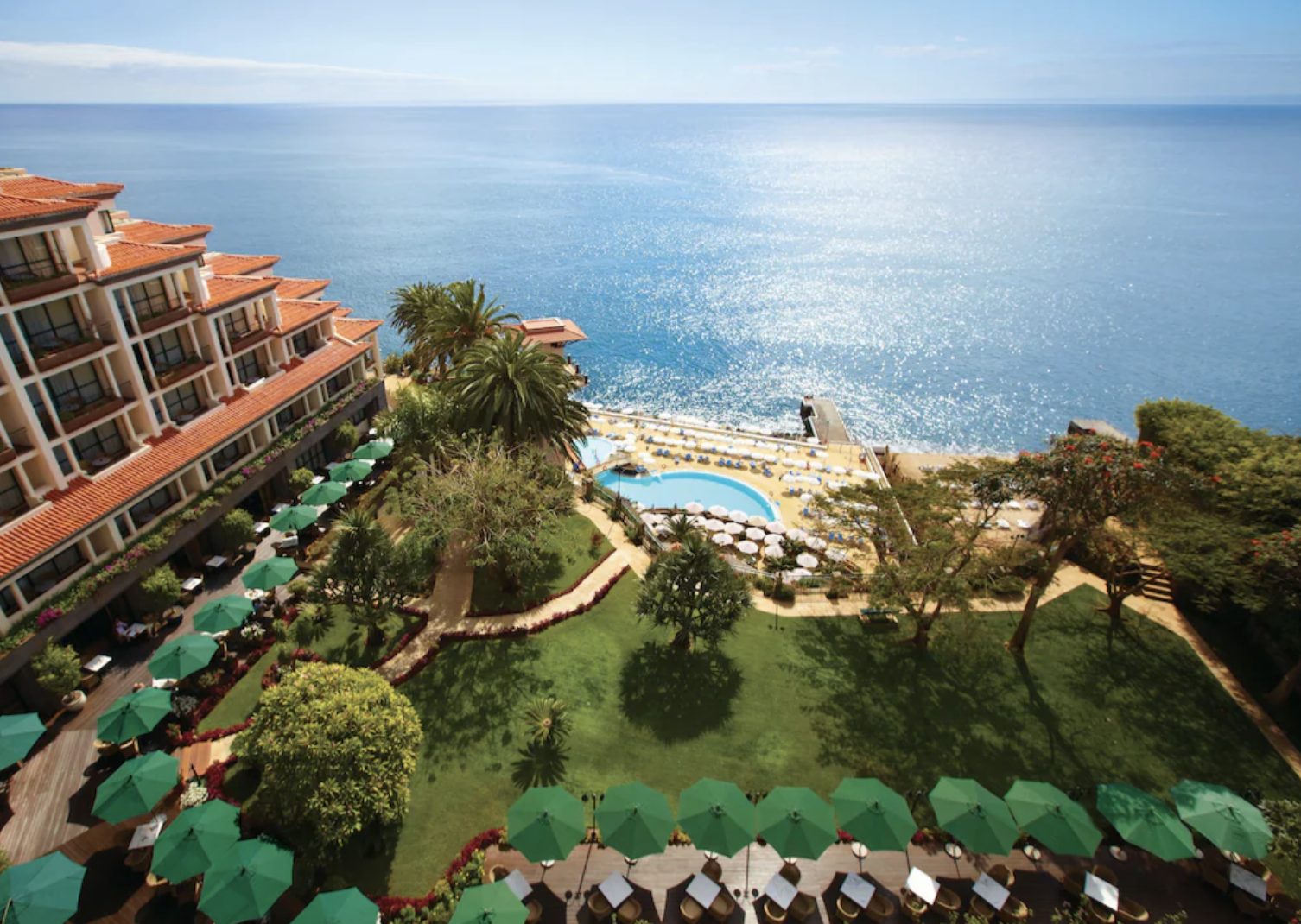 Just a stone's throw from the capital, Funchal, this vast resort fringed with palms rests atop a rugged cliff that overlooks the Atlantic Ocean with private access to the sea. Take a swim in the indoor and outdoor pools separated by a glass divider and soak in the hot tub, champagne glass in hand, over the Bay of Funchal. Rooms are soothing, earthy tones with tropical-print pillowcases adding pops of green. Dine at Il Gallo d'Oro, the Cliff Bay's two-Michelin star restaurant which serves locally sourced dishes such as prawns with caviar and pigeon, paired with Madeira wine. 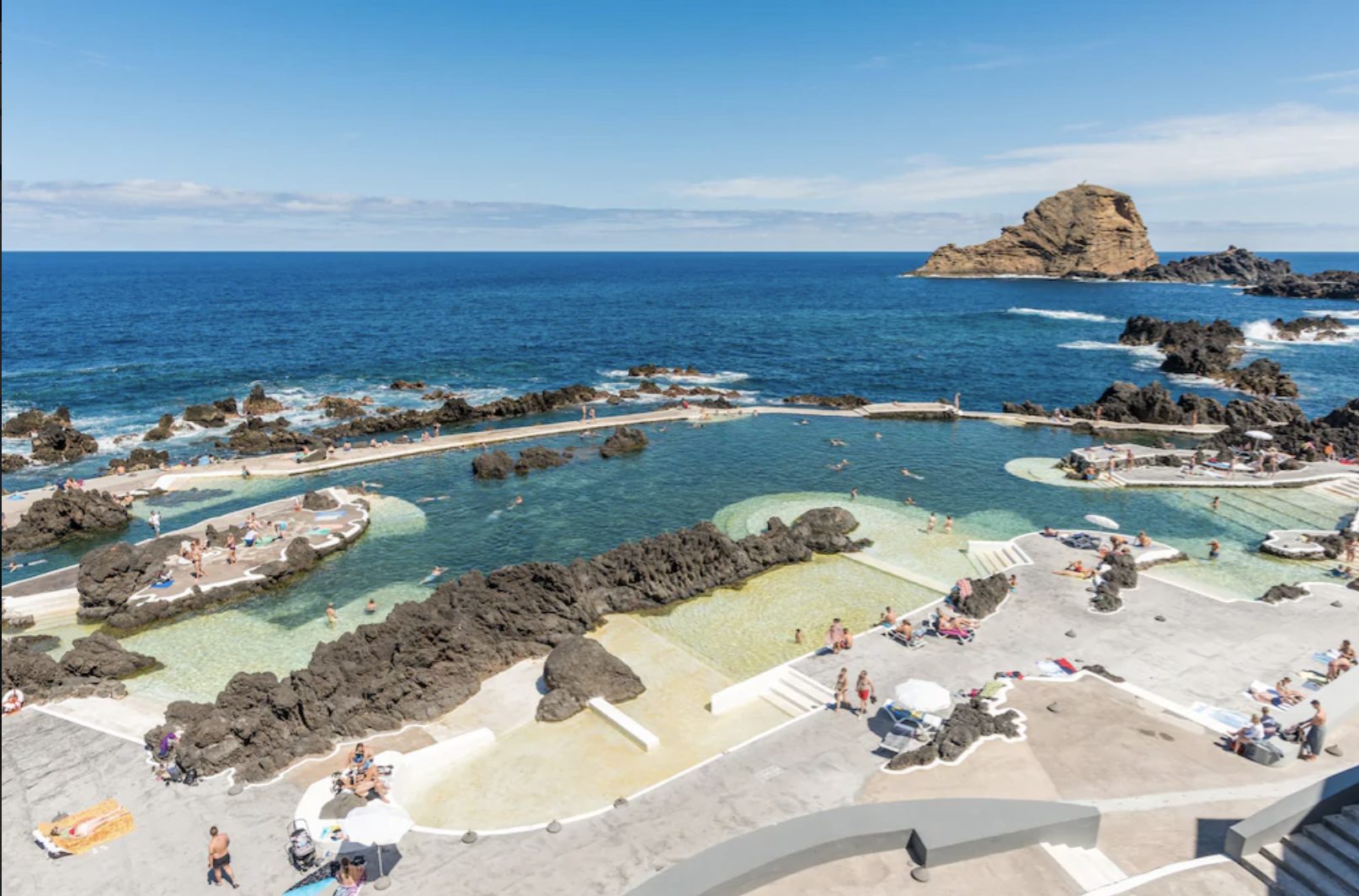 The Aqua Natura Madeira has its own impressive outdoor swimming pool, but the property also unfolds right onto the Porto Moniz Natural Pools, beautiful and refreshing natural seawater pools created by volcanic rocks and constantly re-filled by waves from the Atlantic coast. Located in the charming little town of Porto Moniz on the island's north coast, nearby the hotel is the Madeira Aquarium, which offers diving with sharks. Old photos of the town deck the hotel's corridors and guestrooms are splashed bright blue and green, a fitting colour scheme given the natural surrounds. 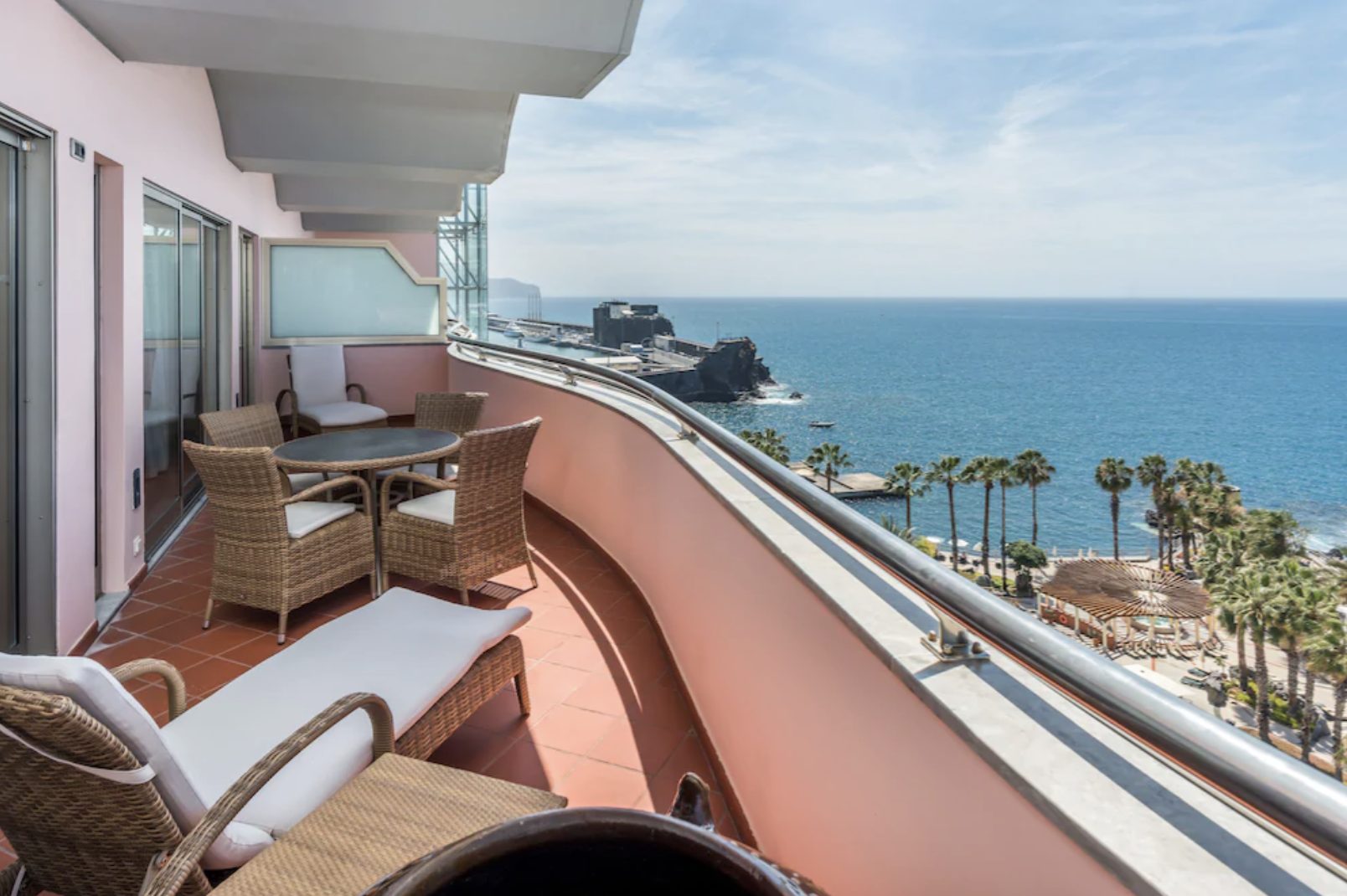 The grand pink and white early 20th-century building on the coast in Funchal was renovated in 2001 and is still utterly luxurious today. Lovely pattern-tiled floors, Oriental rugs and antique cabinets, folding screens and centrepieces in both common areas and guestrooms conjure Portugal's golden age of exploration. The view of the Bay of Funchal – and the resort's private beach – is breathtaking from the outdoor saltwater pools lined with palms and a swim-up bar. 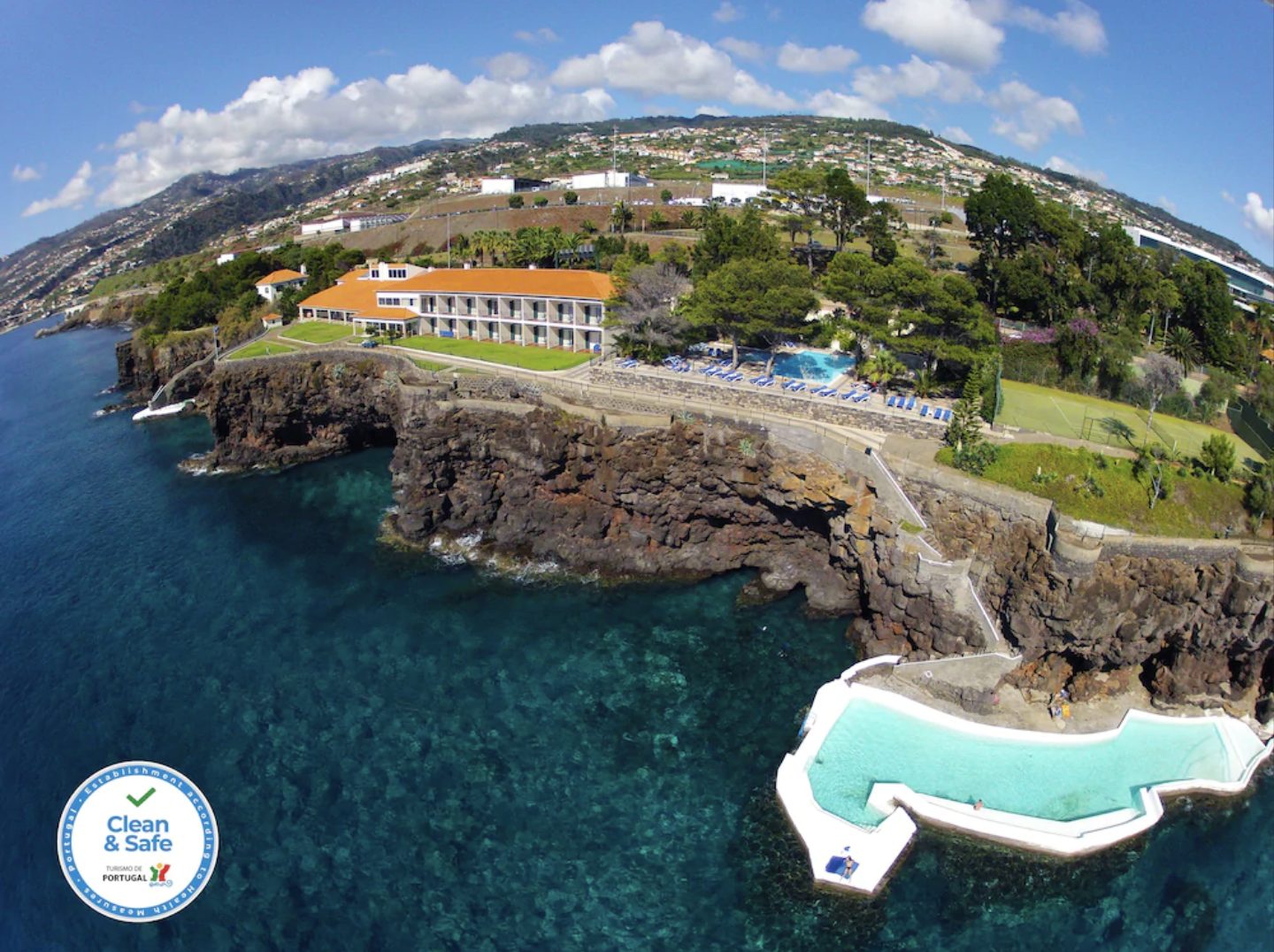 Though close to the airport, this hotel on Santa Cruz Bay is tucked away from the bustle. Albatroz has three swimming pools, one up on the cliff by the hotel grounds and two down by the coast that are filled with seawater straight from the ocean and with views of the Desertas Islands. The hotel itself occupies a quinta – a large country house – and the 20 rooms with their white linens and walls, and blue and white striped pillows certainly has an aristocratic, yacht club air. The hotel's restaurant also serves delectable seafood such as octopus carpaccio and black scabbard fish. 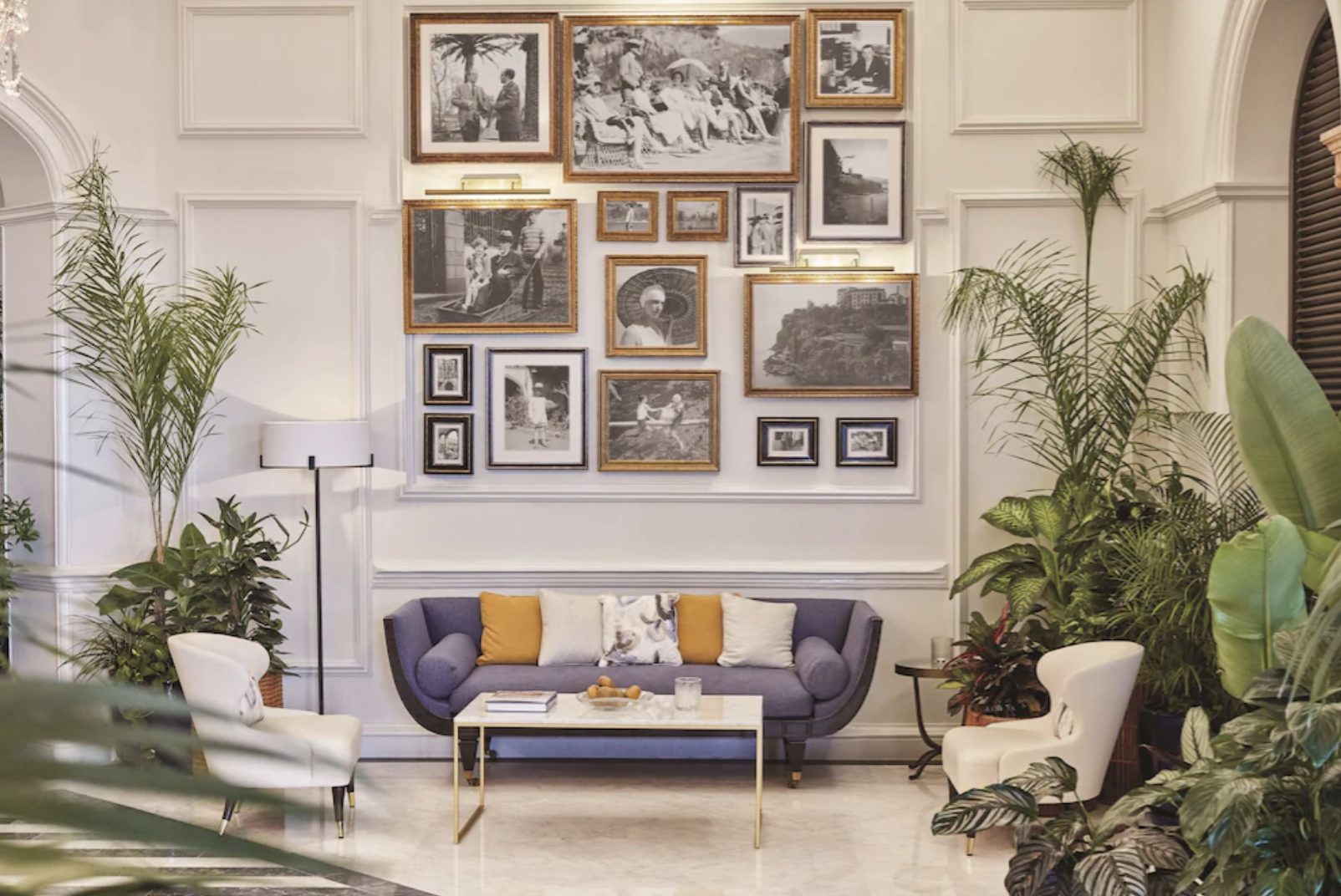 Built in 1891, this 158-room hotel owned by the British luxury hotel group perched on a cliff in Funchal is absolutely palatial. Black-and-white tiled floors and pink veranda walls exude timeless glamour and wicker baskets and chairs allude to the island's local crafts. Guestrooms have a tropical yet luxurious aesthetic with pastel green and yellow walls and fresh flowers. Bathed in subtropical gardens of honeysuckle and jade vine, the hotel has outdoor swimming pools that look out into the Atlantic Ocean and a Michelin-starred restaurant that uses local ingredients such as lobster. 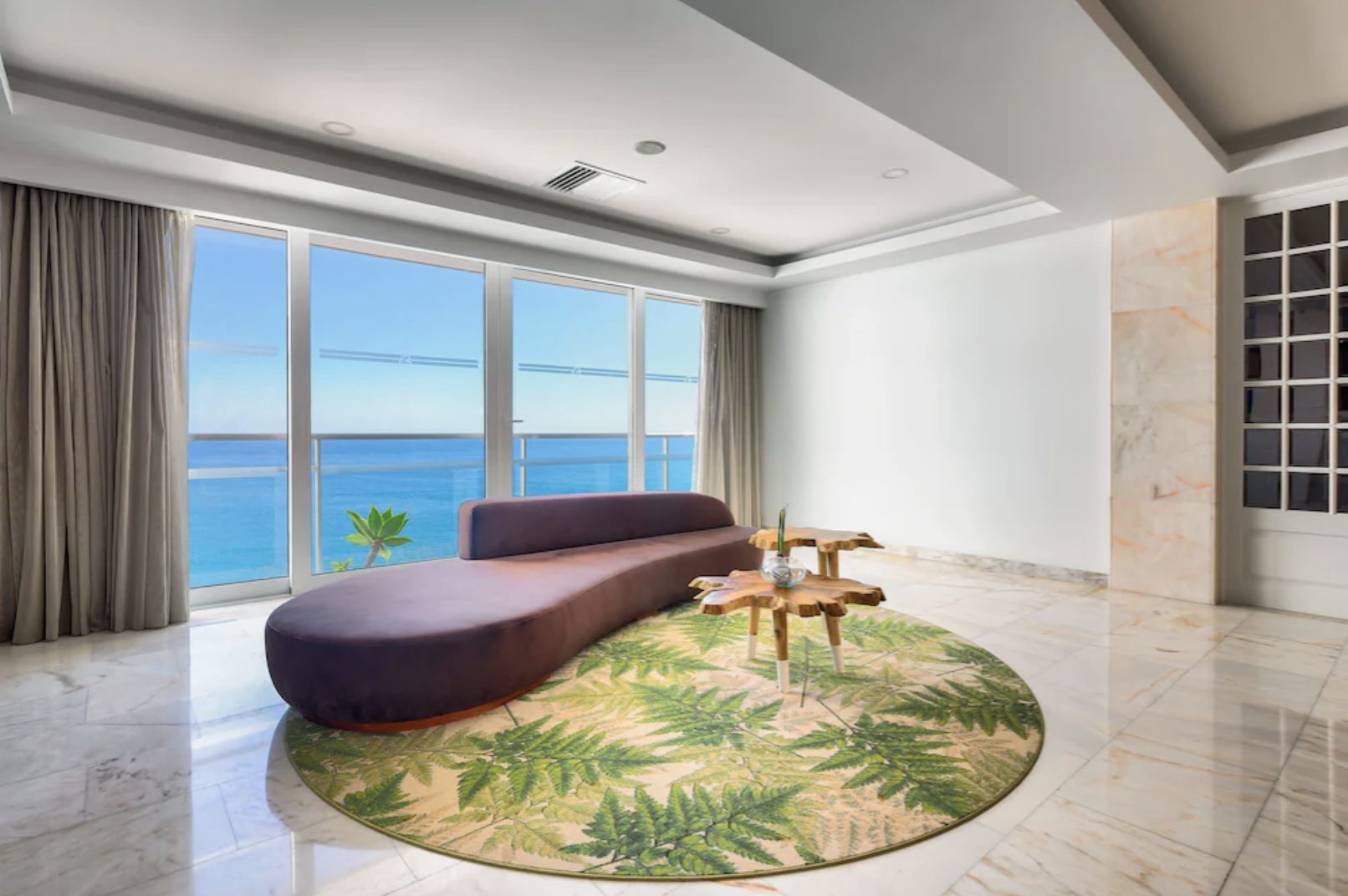 Another Funchal property carved into the cliffs, the Hotel Orca Praia has a winding path that snakes through a succulent-filled garden down to a beautiful outdoor pool hugged by craggy rock formations, and beyond that, a secluded black-sand cove. Rooms have light wood interior with yellow bed runners or bright blue headboards and balconies with glass sliding doors open to sweeping views of the ocean. 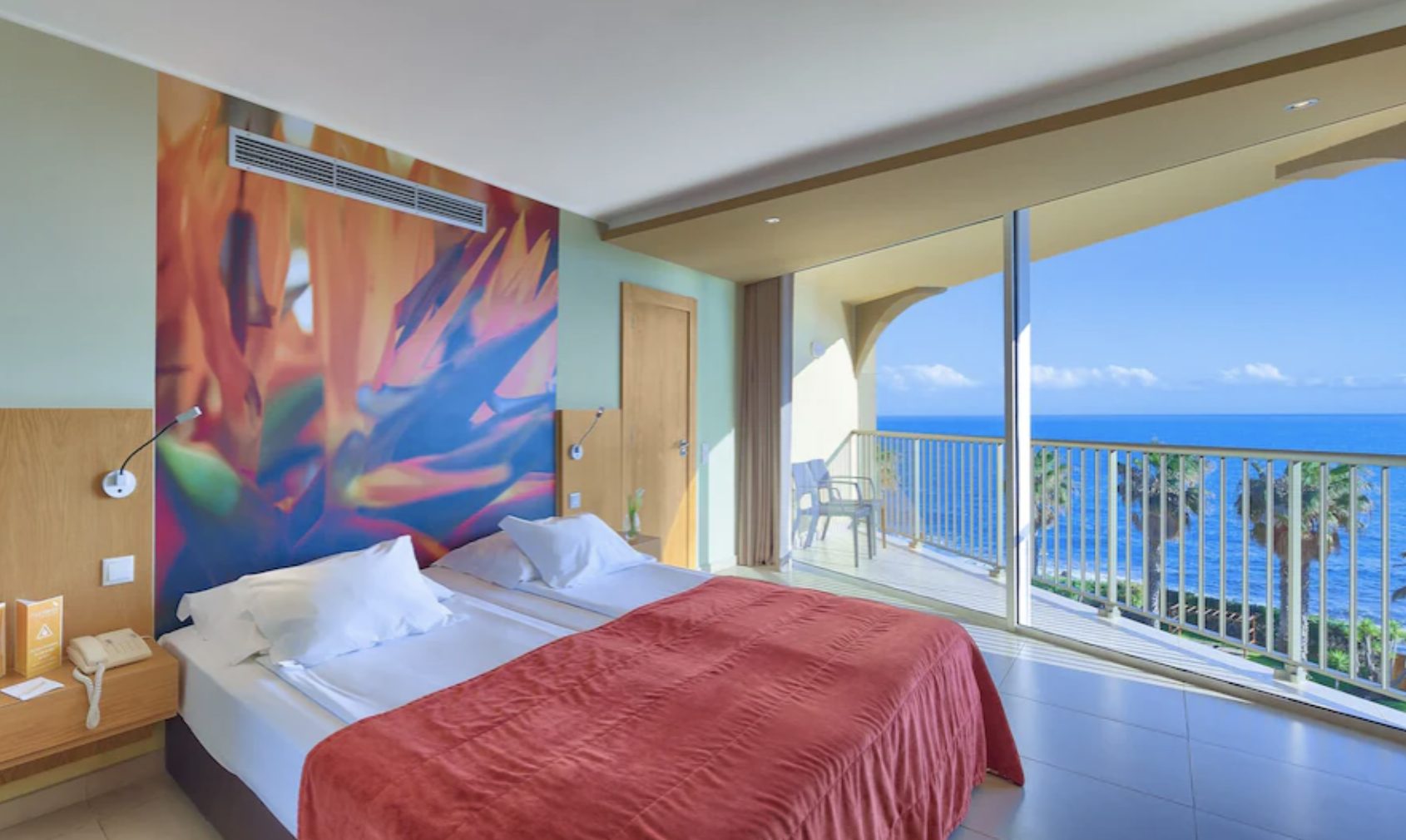 Situated in the less-visited Caniço in Santa Cruz, this cream-façade hotel is a real getaway. The 224-room Four Views Oasis rests on a rocky outcrop and boasts an outdoor heated saltwater pool encircled by tall palms, as well as a promenade that connects to Reis Magos Beach. The lush feel permeates the hotel with the numerous indoor plants and wicker furniture in common areas and pictures of enlarged Birds of Paradise plants in rooms. 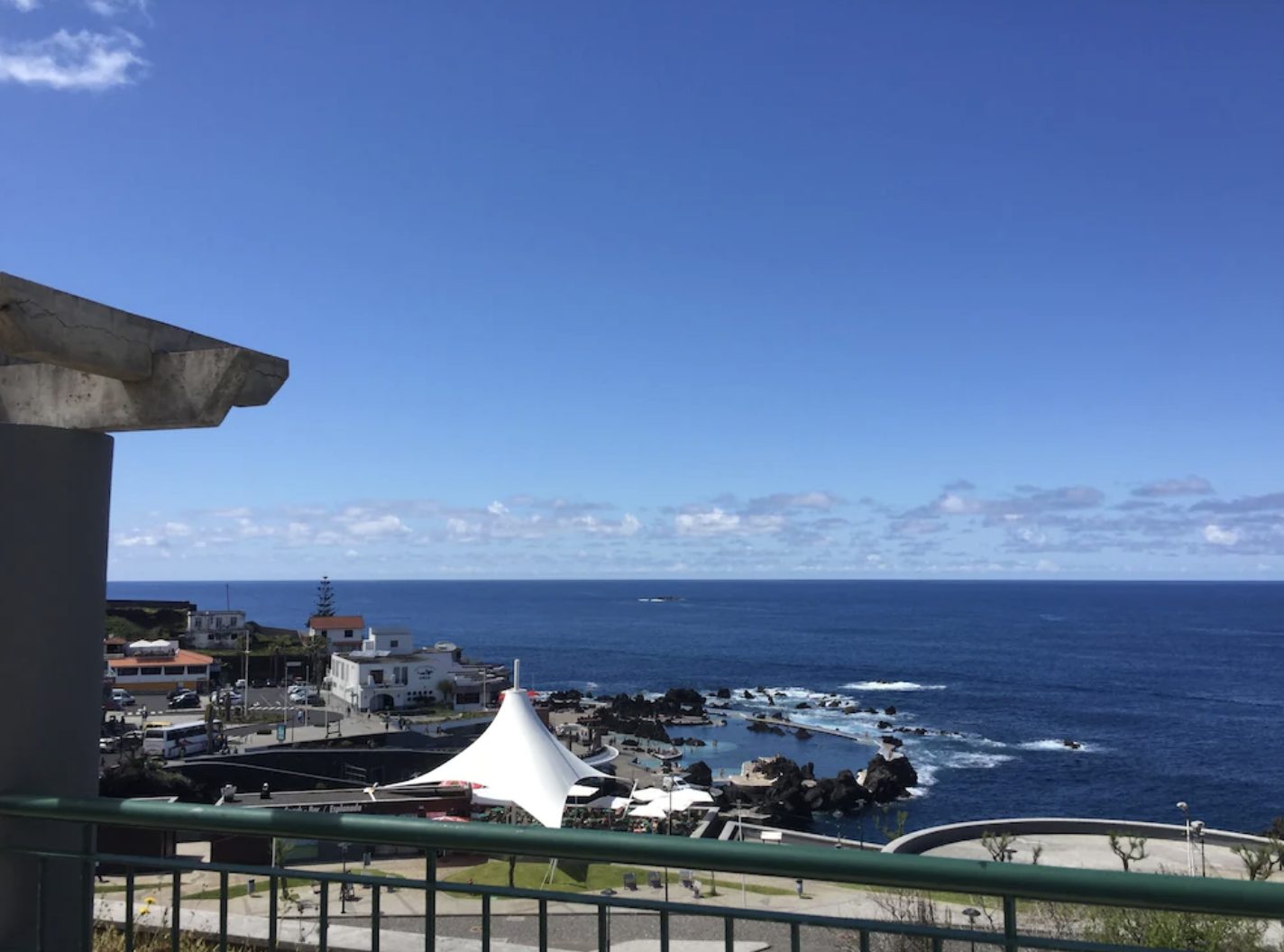 The simple 33-room Hotel Euro Moniz is just steps away from Porto Moniz Natural Pools on the island's rugged north coast. Rooms have views of the natural saltwater pools below, which beckon for a swim. The hotel has an indoor pool and the property is also ideally located to embark on nature exploration. Nearby is the Laurisilva of Madeira, a lush ancient laurel forest dating back to the time of dinosaurs and teeming with waterfalls and natural swimming pools. 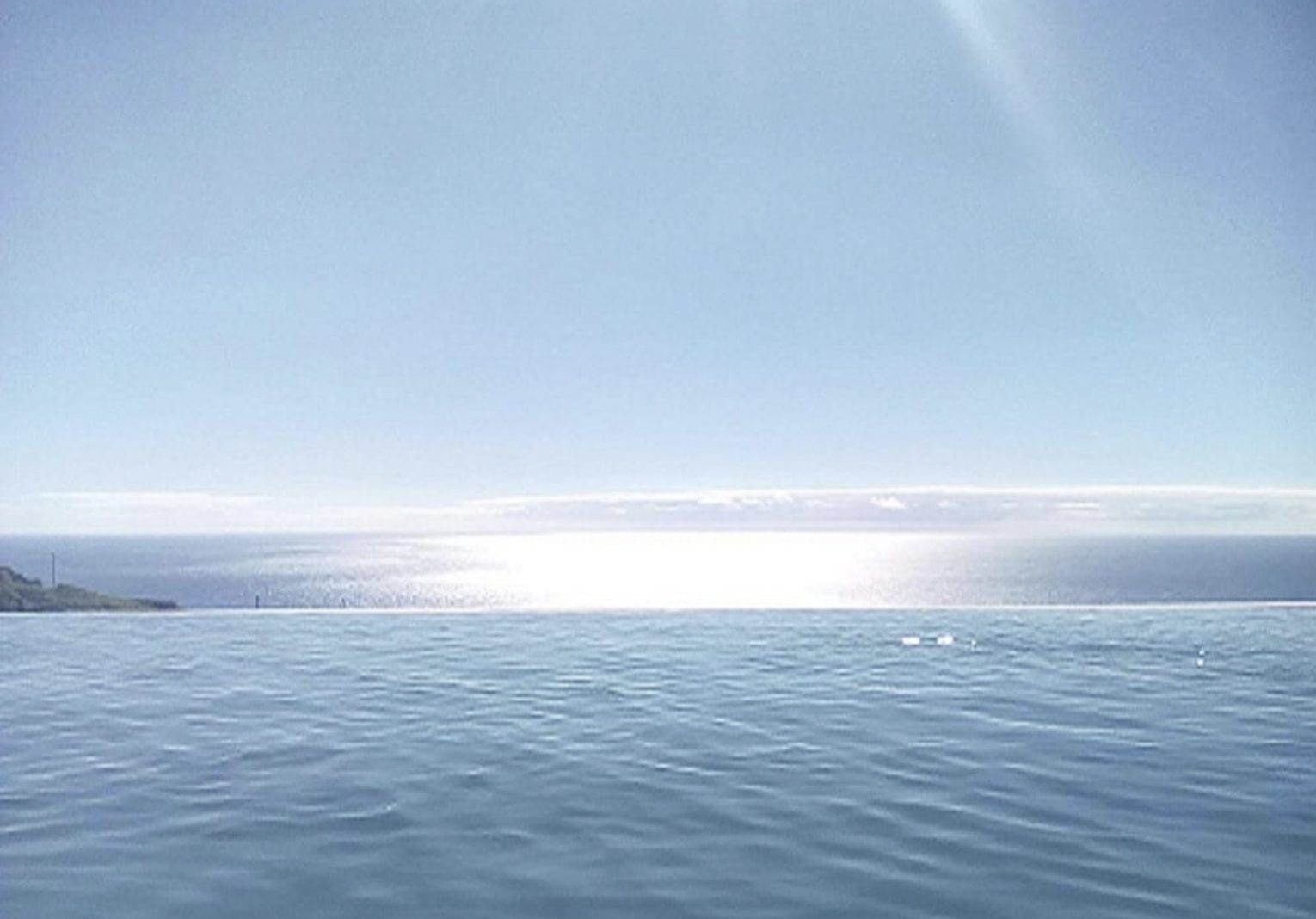 A lush boutique guesthouse with only four rooms and a plunge pool in Calheta, Les Terrasses Suites, which opened in 2019, blends well into its natural surrounds. The area is historically known for its vineyards and banana and sugar cane plantations and the property, named after terraces built from volcanic rock, blends with the old banana plantation it occupies. There's a rustic vibe with exposed cement walls and clay red and gold colour schemes in guestrooms. Banana trees and potted ferns dot the guesthouse and red-brick balconies look out into the ocean on one side, the mountains on the other.

Glamping in the UK – 10 sites handpicked by us, for you.